Your Day Job: My current assignment is to the Rye Police Detective Division. Prior to this, I was RPD Marine Unit C/O since 2000.  The unit staff consisted of myself and 5 seasonal Bay Constables. The majority of them are retired or former law enforcement officers.

MyRye.com: A 23 year veteran of the Rye Police, you were recently promoted to the rank of Detective. Congratulations. It sounds as if you like your job.

Yes. Being a detective was something I always wanted to do in a police department. It is a privilege to be assigned to the Detective Division. 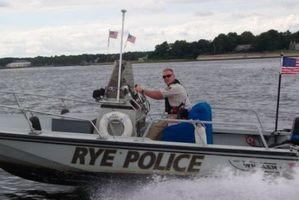 You are responsible for patrolling the 14 miles of Rye coastline on the Long Island Sound—responding to emergencies, enforcing New York State conservation and navigation law, as well as City of Rye statutes relating to waterways. What are the three most common enforcement actions you work on?

3. Boating while intoxicated. Fortunately in the past several years our marine unit has been effective in educating the public about BWI, so we have not had many problems regarding same.

You manage five seasonal Bay Constables, a job that has its origins in the early 1800s in the eastern towns of Long Island when bay constables were elected to two year terms to protect the shell fish beds on the Great Southbay.

Two years before you joined the department, in 1982, the position of Bay constable was created by the Rye City Council for the purpose of enforcement of the conservation laws related to fish and wild life and water fowl hunting. Who are these guys, what qualities do you look for in a constable and where can you find one in the off season?

What we have found that serves the unit best is to solicit retired or prior law enforcement persons. Of course it’s better if they have prior boating experience, but we will train the right candidate. Our unit consists of a retired Bay Constable LT from Mamaroneck, a retired NYC Detective, a former Yonkers Raceway Police officer, a retired Port Chester Harbor Master and a member of our Auxiliary Police Unit in Rye — Andrew Landau, Patrick Early, Larry Miano, Bruce Caldwell and Ronald Olivier.

As the one full time marine officer, are you on the water year round?

Our harbor gets ice locked so we remove our primary patrol vessel form the water in late December. We have the ability to respond year round by the use of our inflatable vessel, (Rye PB 3), which is ready 24/7 to go. We patrol in all weather conditions. We place an emphasis on patrolling in bad weather. That’s when people get in trouble and really need you. Not when it’s 72 and sunny.

How do you interact with New York State Econ officers, Coast Guard and other municipal marine officers from the Sound Shore such as Portchester, Greenwich , Mamaroneck and Larchmont?

We have conducted joint training sessions with units from the USCG Aux, Stamford PD, Mamaroneck, USCG, Greenwich and Port Chester. Out there you need joint cooperation because there are not a lot of police out there. We need each other out there.

Some of the training items have been in climate weather navigation, zero visibility navigation, search and rescue, fire fighting etc.

Do you ever work with community and environmental groups such as Terry Backer’s Soundkeeper group?

Not directly. But we are here to assist whichever entity requests. If of course, it is within our ability and mission statement to do so.

Does the marine unit respond to flooding within Rye ? Did you respond to the April 15th flood with your 12’ Mercury inflatable, one of the three marine crafts under your supervision?

Yes. Myself and two of our full time officers responded with the Mercury. We responded as over town, but primarily in the Indian Village are. Croton Falls Fire Department responded and greatly assisted us with their inflatable. Fire Fighter Mike Outhouse of Croton Falls is a former member of our marine unit and has been trained in flood rescues.

Unfortunately, we do not have the Boston Whaler anymore. It was in dilapidated condition and un seaworthy. It has not been replaced. We are currently down to the Glacier Bay and the Mercury inflatable.

Al Roker of NBC's Today Show shouted out a Rye centenarian milestone this past Tuesday, September 27, 2022. Muriel Antokal of Rye turned a...
Read more
Church of the Resurrection