Forty-four homes have sold in the past six months in Rye City, compared to sixty four during the same time period last year. Interestingly, the average price of the homes sold increased from $1,895,427 to $1,974,602, even though the amount of homes sold decreased. This is certainly better than what is happening price wise nationally, according to a recent New York Times article. Thirteen or 29.5 % of the past six month’s sales were under $1,000,000 with an average sales price of $805,423, while 31 or 79.5% were over $1,000,000 with an average price of $2,464,903. We ran numbers for the past three months in Rye to see if this held true in the short term as well. Still, 26 homes have sold since the beginning of the year for an average price of $2,080,019, compared to 37 homes selling for an average of $2,032,779 in the first three months of 2007. It seems the price increase has narrowed, but this is a small sample and the spring market hasn’t really kicked in yet. The pace seems to be picking up, and more houses that have been on awhile are going into contract. Time will tell about the continued health of Rye’s real estate market.

Playgrounds and Parades: Free (or nearly free) Activities for Kids 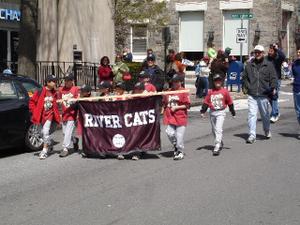 (PHOTO: The 51st annual Rye Little League Parade is on Saturday, April 12th) A lot of Manhattan parents make the trek north to Rye looking for green space and good schools. Prompted in part by a comment by "Concerned Rye Parent", I was thinking it would be helpful for parents of young children considering the area to get an idea of what Rye offers in terms of outdoor recreation.

Rye City encompasses two school districts: Rye City School District and Rye Neck Union Free School District. Each of the three elementary schools in RCSD – Milton, Midland, and Osborn – as well as Daniel Warren and F.E. Bellows in RNSD, have playgrounds on the premises, as well as most of the preschools in the area. There are two large play areas at Rye Recreation, 281 Midland Avenue: slides and green dinosaurs decorate the playground to the left of the administrative building, and a state of the art playground with a blacktop/hitting wall area to bike, rollerblade or hit tennis balls is located in the back.  "Rye Rec" also has fields for soccer and baseball, as well as outdoor picnic shelters available for rental. 967-2535.

When my three boys were younger, just feeding the ducks was a highlight. We used to stroll down to the end of Bradford Avenue (off Florence Avenue in the Bradford Park section of Rye) to the foot bridge to see ducks and turtles, or you can visit the recently renovated duck pond at Rye Town Park. After feeding the ducks, you can bring a sand shovel over to Oakland Beach, or take the kids out for a burger and fries at Seaside Johnnies. If the sand is too much, head over to Rye Golf Club and Pool in the summer months.

You may have missed the Rye Neck PTSA Spring Fair on a recent Saturday, but there are plenty of other free (or inexpensive) outdoor parades, fairs and activities for little ones. A sample of upcoming events:

Of course, there are plenty of indoor activities for kids as well. We will cover that in a future article.