Real Estate Update August 2008- Where Are We Headed?

Seventy two homes have sold in the past six months in Rye City, compared with one hundred three sales during this same time period last year. Eighteen or 25% of the current sales are under $1,000,000 with an average price of $794,417, and fifty four or 75% of the sales have been over a million dollars with an average sales price of $2,234,972. Still, in comparing the average sales prices between the two time periods, the average sales price in 2008 was slightly higher at $1,874,833. compared to $1,701,901. in 2007. The August issue of Real Estate In Depth reports that the 2008 Second Quarter Residential Real Estate Sales Report, released on July 22 by the Westchester Putnam Multiple Listing Service, indicated that the sales downturn is now across all market categories* (in Westchester County as a whole). 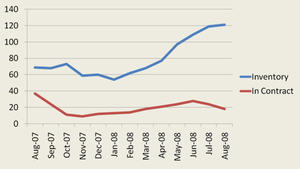 In the past year that MyRye.com has been tracking Rye City housing trends, the local inventory started to build up this spring, with 121 Rye homes on the market this August compared to only 69 at the beginning of August 2007, while homes entering contract have declined somewhat, as indicated in the accompanying chart.

Where Are We Headed?

A lot has changed in the local real estate market in the past year- the size of the housing inventory, the amount of monthly sales, the tightening of mortgage qualifications, coupled with changes in our economy as a whole: rising gasoline prices (Exxon Mobil recently reported the highest quarterly gain ever posted by a U.S. company!) and corporate layoffs.

The good news is that we seem to be entering a stabilization period, at least according to stock guru Jim Cramer’s report on MSNBC’s Today Show August 1st. The government is stepping in to stabilize the mortgage market and gas prices are starting to drop. On the housing front, deals are still getting done, qualified buyers still get financing, mortgage rates are historically low and recently dipped, and serious buyers who want to get their kids into the school system before September are coming out of hiding.

Some clients are choosing to rent, keeping the rental market strong. According to Economist Laurence Yun, the current real estate market conditions are still positive for buyers: