Dale Hemmerdinger, the multimillionaire chairman of the MTA and a resident of Rye’s Island Drive is not going to be happy. The Metro North and MTA have been lambasted in an annual commuter survey conducted by Assemblyman George Latimer. 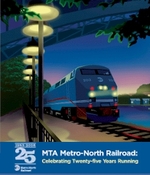 "Clean the trains", "Trains are filthy’, "Cars smell bad" are just some of the comments of Rye commuters who completed Latimer’s survey. Seventy-one percent of Rye residents scored "Railcar quality and comfort" Fair or Poor and only 9% rated the railcar quality Very Good (that must be the guy that buys three Bud tall boys before boarding – no chance that guy was sober…).

Here is some of the color commentary provided by the 37 Rye commuters responding to the survey:

More than a couple comments on:

Latimer was more politic than his constituency in his comments saying ""The people who commute everyday on the New Haven Line see the rail service as it is, not as it may be promoted to be; many of them have international experience with rail in Europe and Japan, as well as in other major U.S. metropolitan areas. As top-level professionals and business people accustomed to leading companies and striving for consumer satisfaction in their own careers, they know how to differentiate the excellent from the good, and can identify the barely acceptable. When we fully make the riding public a partner in re-shaping our commuter rail – by listening to and responding to their concerns – we’ll start to improve the quality of the service to the way it ought to be"

The MTA can start by cleaning the train car bathrooms.