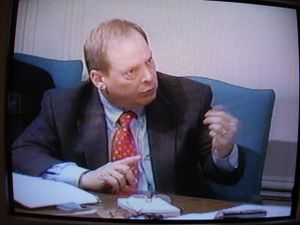 (PHOTO: George Pratt, on the offensive) Talk about a real sneak attack… Councilman George Pratt, not known for being shy, went on the offensive towards Councilman Joe Sack for Sack's comments on MyRye.com regarding the possibility of locating the future police/courthouse facility at Disbrow Park (Sack strongly opposes the idea). You can see the entire video (just below) on MyRye.com.

Pratt dismissed MyRye.com as "this little blog thing or whatever" saying until the fracas, he had never heard of the web site. Pratt said Sack's comments were misleading: "You don't owe me an apology but you owe her [Councilperson Catherine Parker] an apology. OK. Because what you did was wrong. OK. It was wrong. We are all grown ups. We get the opportunity every two weeks. You got a bone to pick. You want to pick a fight with me do it on public TV. Don't do it on a blog site."

The comment from Pratt is ironic because much of the initial fracas ensued exactly because the meeting on the police/courthouse facility was not televised, or apparently noticed to the public in any way. Sack volleyed saying "I will not apologize for letting people know" [about Disbrow Park as a possible location for the police/courthouse facility]. 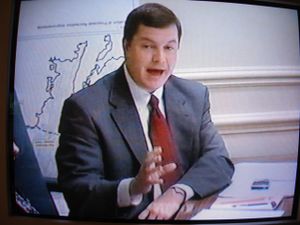 (PHOTO: Joe Sack fires back) The engagement continued for a good 20-25 minutes with Pratt saying "…this is a sneak attack… [and MyRye.com is] an inappropriate forum" with Sack returning "what you maybe are is embarrassed"

In the end, Sack may have gotten his way with Mayor Steve Otis saying "I will guarantee there are more than enough votes that it [the police/courthouse facility] never happens at Disbrow."

As for Councilman Pratt's belittling comments about MyRye.com, we think the web site and community of readers is an excellent forum for debating the issues. We welcome his comments… And your comments… Leave one below.

The video of Pratt, Sack, Otis and others follows in three parts: