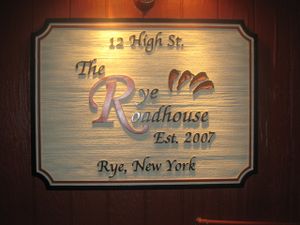 If you're looking to take your children to a good bar, have I got the place for you.  Right here in Rye. Seriously.

According to their website, "it's a great place for good food and good friends" and they thoroughly live up to this mantra. Despite being in Rye for three years and hearing a lot about it, I had never been, nor even set foot in the vicinity.  You have to look closely to find the Roadhouse, sandwiched neatly in a residential neighborhood.

But make no mistake, it is truly a bar/tavern, with the dark wood paneling and the TV bracketed to the wall airing the sporting event of the day.  One side of the room contains the classic bar replete with bar stools, with the other side devoted to table service at basic thick dark wood tables and chairs.

Walking in, you feel that you've just stepped into the neighborhood haunt, with Cliff and Norm at the bar, and old friends sitting at the tables.  This is only accentuated by the over-the-top warm and friendly wait-staff, some of whom who will sit down at your table, want to hear everything you have to say and gush about how your kids are the greatest and cutest people ever.  All the while, they're completely genuine about it and don't seem to be angling for a bigger tip, which of course it is impossible to not provide.

It was a surprising mix of patrons the first night we went, from retired couples to a small group of friends to a young couple with their 2 year old. After receiving our water served in kitchy mason jars with handles, we were asked what we wanted to drink.  It felt a little sacrilegious to ask for a wine list.  I anticipated this to definitely be the draft beer kind of place.  But the wine list was surprisingly full and decent.  Somehow ordering a glass of the "Fat Bastard" cabernet made me feel like it was ok to have some wine.  And when it arrived, it was one of the more generous pours I have seen. There was clearly no measuring of any kind going on here.

The menu is a great hodgepodge of Cajun specialties with homemade chilis, salads and sandwiches mixed in. There were specials handwritten on the chalkboard that I completely missed until after we were served our meals (honestly missed this both times I was there). The kids menu is a child's dream – mac and cheese, grilled cheese, and chicken tenders. I tried to follow "diner rule" and only order the Cajun items.  The jambalaya was great with good spices and a nice kick. It turned out to be a perfect starter to order with a group of people. But the gumbo I wasn't sharing – despite the fact that there was plenty to go around.  It had a somewhat of a boomerang spicy kick that surprised you well after taking a bite. 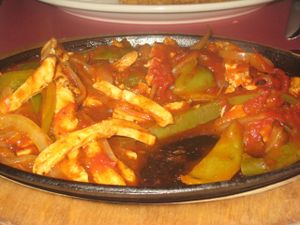 (PHOTO: the fajitas) The ribs got the highest of accolades among our group – good sauce, not particularly spicy, and equal to "Q" – the holy grail of BBQ around here. Fajitas were rated a mixed bag by our group.  Good, but heavy on the tomato.  Seems the real issue is that these are not Mexican fajitas; they are the Cajun version. The alligator nuggets were a huge hit with the kids, but then again, how could eating an alligator be anything else but the coolest thing ever?

But the highlight was the deep fried mac and cheese squares – either in plain or jalapeno variety.  Our group opted for the plain, but I had to make the second trip for the jalapeno (good, but not as good as the original).  Whoever thought up this dish is a genius.  Mac and cheese made into a finger food.  Sort of looks like a chicken nugget on the outside, but when you bite into them, the cheesy goodness of mac and cheese stumbles out.

Everything was done in a "healthy" style – portion-wise that is; this is not the place to come when starting your low-fat, small plate diet. Quite a few dishes come with the ubiquitous sauce of the night – a Russian dressing type mix of ketchup and mayo.  How happy you are about this depends on how much you like these two ingredients.  Neither of these happens to be my personal favorites.  It shows up on quite a few dishes – the calamari, the ribs, and the portobello sandwich (which was deemed good by our table, though the fries were lacking).

The only items that even verged on not being good were the complimentary cornbread, which was a little stiff but in a fun shape that forgives all – somewhat of a cross between a mini-twinkie and the French madeline cookie.  And since it's free, it's pretty hard to complain.  And the calamari on my first visit was a bit dry and over-fried, though definitely less so and perfect for my anything-fried-loving kids the second time. 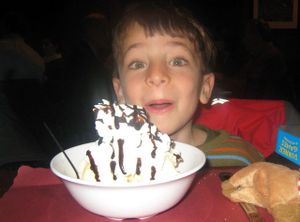 I strangely passed up dessert both visits here, though I let my kids have the ice cream sundae which was almost as big as their heads.  But not sure my willpower is enough to survive three times without the brioche bread pudding with bourbon, warm apple cobbler, or key lime pie, especially knowing how "healthy" the portions are.  And given my first two experiences, I am sure it won't be long before I am back to sample one (or two).

Rye Roadhouse is open for lunch and dinner every day and Sunday brunch.  It can get pretty crowded so it doesn't hurt to make a reservation at 925-2668 (Rye Roadhouse, 12 High Street, Rye).

Diana Tapper has been trying out Rye area restaurants since her move to Rye in early 2006. She has coordinated the Dining Around Town group for the Rye Newcomers and Neighbors Club for two years.