Home Government Council: No Counsel... No Shoe-In for Schubert, No Sorry from Shew
Government

Council: No Counsel… No Shoe-In for Schubert, No Sorry from Shew

Attention former Rye City Mayor Ed Grainger. If you can hear us, call former Mayor John Carey. He just volunteered you to serve as joint independent counsel on the Schubert – Shew affair. For free. 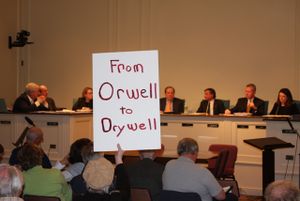 (MORE PHOTOS: Check out our entire photo album at the end of our story) Bob Schubert's dried-up pond took center stage tonight at the Rye city council meeting, drawing one hundred plus citizens who packed the usually empty chairs in city council chambers. In between various blow-ups between Mayor Steve Otis and Councilman Joe Sack, between Councilman Mack Cunningham and Councilman Sack, pointed exchanges between various speakers and the city council and a public statement but no apology from Rye City Manager O. Paul Shew, a couple things were decided:

In a dramatic turn, former Rye Mayor John Carey suggested he and former Rye City Mayor Ed Grainger serve as joint independent counsel for free, to avoid the deeper contention of hiring someone at a $10,000 budgeted rate. Sack revised his motion to reflect the new proposal but he was still the only councilperson to vote for the motion, although others began to warm to the idea. "There might be the beginnings of a breakthrough idea there," said Councilman Andy Ball aboutthe Carey/Grainger "ticket".

Beginning the meeting, Mayor Otis said council is "making sure we do this right" and that in the next 48 hours the city will post all of the relevant Schubert documents on the Internet for review. "You will be able to get them on the Internet in the next 48 hours" said Otis. After saying an independent counsel was "premature" Otis asked for good behavior saying "people in other communities are watching so we have an example to set."

Sack battled with Otis saying it was "not feasible" and "not appropriate" for city council to conduct an investigation itself and that corporation counsel should not be the one running any investigation. "My input has been marginalized," said Sack. Otis fired back to Sack saying "some of the things you said were not accurate" and "there's lots of mystery in your words Joe" and "I think the word investigation is a little strong". You get the idea.

Councilman Cunningham also tangled with Sack saying "As far as what conspiracy might be going on here in city hall I think it might be in Mr. Sack's head."

Bob Schubert, who took to the podium a few times told the council "I am terribly hurt by the indignity of Mr. Shew's allegation… that was a hell of a blow to the solar plexus." 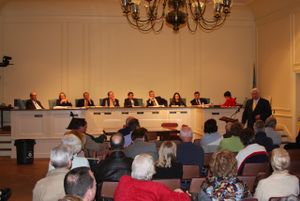 (PHOTO: City Manager Shew Faces the Crowd) Over an hour into the meeting, City Manager Paul Shew stepped down from the dais, went to the podium and addressed the council and those attending. There were no apologies. "If as a public official you see someone who you believe to be in trouble… you don't just sit idly by and wait forsomething happen," said Shew explaining his reasoning for calling on mental health officials to visit Schubert. Shew said he had never seen a situation where an extended hand was made, accepted and "then made into a publicity event."

It looks like we'll be seeing Mr. Schubert at many more counsel meetings… oops, we mean council meetings.