Home Government Mistakes Regarding Schubert Property "Swept Under The Carpet" According to Former Rye...
Government

Former Rye City Naturalist Chantal Detlefs says errors were made, standard procedures were not followed regarding Rye resident Bob Schubert's wetland garden and City Manager Paul Shew had things "swept under the carpet" (see Schubert: Two Hours of "Interrogation"; Doubts Shew's Sincerity and Schubert and the Shew Sham: Who is Crazy Now?). Schubert, a constant at the open mic portion of city council meetings, has asked Rye to take responsibility for the loss of water on his property, alleging violation of wetland code by a neighbor.

Chantal Detlefs served as Rye City Naturalist from 1999 to 2006. Prior to serving as naturalist, she was an environmental educator at the Rye Nature Center. She currently teaches science at a private school in Connecticut. 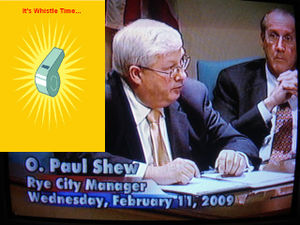 "I can’t stay quiet anymore!  When I read that Paul Shew had a psychiatrist evaluate Mr. Schubert I was appalled.   Mr. Schubert isn’t crazy he is severely angry and rightfully so.  My name is Chantal Detlefs and I was the City Naturalist at the time the neighboring project was evaluated by the City Engineer.  Normally I would have had a chance to review the project and make a determination as to whether the project may or may not be subject to Chapter 195: Wetland and Watercourses, of the City of Rye Code.  Unfortunately in this case I was on vacation but I designated my duties to the Building Inspector never the City Engineer, as required by our vacation leave form.  I want to make myself clear…….It has always been policy to defer Naturalist Determinations until the Naturalist has returned from leave and if that was not possible a wetlands consultant was hired to perform the Determinations.  The Building Inspector and City Engineer never before performed Naturalist Determinations while I was on vacation leave.

When I came back from my vacation it was bought to my attention that a project on the neighboring property was reviewed and it was determined that a building permit was not needed for the project because it was a repair to existing structures.  Looking at the plans I noticed that the proposed replacement pipes are smaller than the original pipes.  This is not replacement in kind but the Wetland and Watercourses code does read that any repair of an existing structure “shall not be expanded, changed, enlarged or altered in such a way that increases its nonconformity without a permit”.  So one would think that smaller pipes do not increase the nonconformity of the existing structure but its affect may.  The larger issue is that a drywell was on the proposed plan and no drywell existed on the property.  That clearly is not replacement in kind and definitely increases the nonconformity of the existing structure.

So should there have been a building permit?  That was not for me to judge but had there been a chance for me to review the project I would have definitely checked the box stating “may be subject to the requirements of Chapter 195: Wetlands and Watercourses.  The neighboring property usually had standing water on it and it was also delineated as a wetland.  The project was definitely subject to Chapter 195.  I discussed my opinion with several staff members.  I don’t recall exactly when Mr. Schubert’s complaints started in the process but once they did the City Manager asked me to write up what had happened. Staff had several meetings with the City Manager and in many occasions I made it clear that an error had been made.   It was heard and known but swept under the carpet and Mr. Shew decided to deal with the issue in a different manner.  I am a respectful employee and therefore followed the direction that my boss requested.  I regret it but at the time there was no way I was going to go up against Mr. Shew.

I met with Mr. Schubert on many occasions but I did not say anything about my opinion although I know he sensed that I was doing what was expected of me not what I thought was right.

While looking into the matter, it was discovered that Mr. Schubert had a wetlands permit on his property when he was doing work.  In fact I think it might have been the first wetland permit.  In the file there is a report stating the Mr. Schubert’s pond is fed by surface water and provisions were made to preserve the pond.  Placing a drywell on the neighboring property diverts water into the ground therefore taking away surface water which might have fed Shubert’s pond.  I say might because I don’t know of any evidence confirming or denying a connection between the two properties water, but it seems obvious.

I also want to bring attention to another portion of Chapter 195. In 195-1 under the intent of the code it starts “It is the intent of the City of Rye that activities in wetlands, watercourses and wetland/watercourse buffers conform with all applicable building codes, sediment control regulations and other regulations and that such activities not threaten public safety, the natural environment or cause nuisances by:  Adversely altering the recharge or discharge functions of wetlands, thereby impacting groundwater or surface water supplies”.  Mr. Schubert claims that to work done on the neighboring property adversely altered the recharge functions of his wetland.  Why has there been no investigation into this matter.  If the City did look into it then where is the statement from professionals confirming or denying his allegations?  And nowhere does it say that the burden of proof lie with the property owner making the complaint.  It is the City’s responsibility to ensure that the code has or has not been violated.

I am not stating that the City Engineer has done something wrong.  I am stating that he made a mistake.  We all make them.

This is a difficult thing for me to do.  Those of you who know me know that. I am not the type of person to cause controversy but I am a person who is honest and has a hard time sitting back when I see something wrong.

Lastly, I apologize to Mr. Schubert for not coming forward earlier I know it has caused him tremendous heartache."

Leave a Reply to The Wry Record Cancel reply