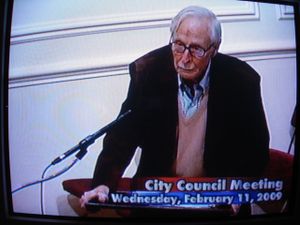 Schubert, a constant at the open mic portion of council meetings, has asked Rye to take responsibility for the loss of water on his property, alleging violation of wetland code by a neighbor. The city has refused to become involved. 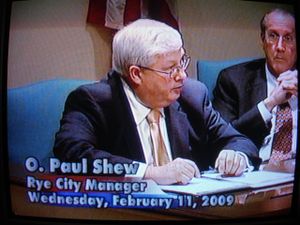 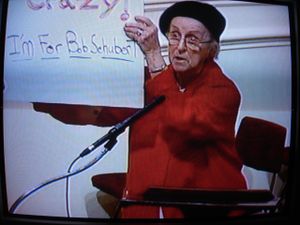 (PHOTO: Sis D'Angelo with sign supporting Schubert) Five others spoke in support of Schubert including Ellen “Sis” D’Angelo, a member of the 2008 Westchester County Senior Hall of Fame. "You should all be ashamed of yourselves," said D'Angelo, addressing the council. During a second turn at the podium, she demanded City Manager Shew apologize for his actions (sending mental health experts to Schubert's home). In response, Shew stated he was "pleased to hear Mr. Schubert had a favorable experience" and then demurred saying any more, citing Mr. Schubert's privacy.

In discussing the actual wetland issue at hand, Councilman Joe Sack said "it almost seems like groundhog day" and "it has devolved into a blame game". Sack suggested that the city, without changing its original ruling, take another look and see if a resolution can be had by approaching the neighbors. Mayor Steve Otis said "a new attempt can be made".

Facebook
Twitter
Email
Previous articleRye Off the Record: Dog Day Afternoon, $1.3 Million Off & More
Next articleMistakes Regarding Schubert Property “Swept Under The Carpet” According to Former Rye City Naturalist