Home Government Hydrologist to Schubert: You're All Dried Up
Government

Hydrologist to Schubert: You’re All Dried Up 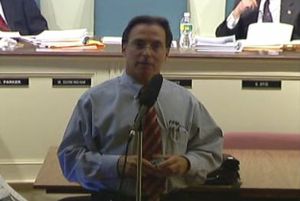 Our follow-up on this one is late, but last Wednesday, the (The) hydrologist hired by Rye City presented his findings in the Schubert pond affair. In short, Kevin J. Phillips, the hydrologist from FMP Group, told Schubert and the council that the Gates dry well, the center of three years of council meetings, did not dry up the Schubert pond. Where we all go from here, no one knows…

Theresa Juva at LoHud had the write-up:

"Kevin Phillips of FPM Group told a packed room and the City Council last night that a study of William Gates' property on Magnolia Place found no indication that flood-mitigation work there diverted water away from Bob Schubert's pond on Forest Avenue.

"Looking at it from a scientific standpoint, it doesn't appear that Mr. Gates has done anything to change the water balance into the pond," he said…

Phillips explained that based on the area's topography, it would be impossible for Gates' small dry well to divert water away from the natural stream into Schubert's pond…

"Over time, changes to the groundwater and surface-water regime play crazy tricks," Phillips told a contentious and impatient crowd, noting that "ponds are vulnerable to groundwater fluctuations."

Schubert was visibly frustrated during the presentation.

"They've never answered how a 15-year running pond – within two or three days of work on the Gates property – where the water went," Schubert said outside the meeting…

The engineer also offered several solutions to get Schubert's water back.

The ideas included creating a well on Schubert's property that could direct groundwater to the pit; snaking a pipeline from Gates' well to Schubert's pond; or letting runoff in from Forest Avenue.

Phillips also praised the care Schubert has shown it and noted that the pond is valuable in acting as a filter for water traveling into Long Island Sound."