The Empire Center for New York State Policy, a conservative think tank, has published a new database that shows Rye City has the second highest tax rate of the 61 cities in New York State. Rye's taxes per capita are $1,343 vs. the "Downstate Medium City Average" of $1,010. 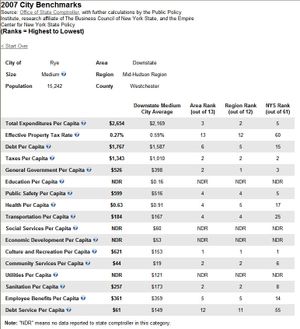 Rye has one of the lowest effective property tax rates of 0.27%, ranking the second lowest in the state–#60 of 61 cities. Rye also ranks #1 of 61 cities in spending for culture and recreation per capita–spending $621 vs. $153 for the "Downstate Medium City Average". All data is from 2007.

See the chart above or search the database yourself.

Tell us what you find interesting by leaving a comment below.