MyRye.com's restaurant columnist Diana Tapper tells us about a celebrity chef in our midst.

Looking for a father's day treat for your "foodie" dad?  Or a memorable night for a grad?  Or that special place for an anniversary celebration?

La Panetiere Restaurant is hosting Tony Esnault, a three-star Michelin chef, from June 17 – 20 for special lunches, dinners and cooking demonstrations – all at prices far below what you would pay in his previous restaurants. 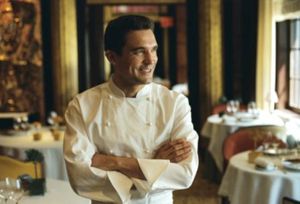 Tony Esnault has a string of restaurant successes and awards under his belt, including securing four AAA Diamonds and four Mobil Stars during his time at the Ritz Carlton in Boston.  More notably, he was the Executive Chef for Alain Ducasse at the Essex house in New York City in 2006 when it earned three stars – the highest honor – from the Michelin Guide, an accomplishment shared by only a revered few in the industry and only seven restaurants in the US.  He then moved with Ducasse to the St. Regis hotel to become Executive Chef of his new restaurant Adour, earning three stars from the New York Times and two stars from Michelin.

Tony will be kicking off his visit by offering 11:30am lunchtime demonstrations on how to prepare a bi-colored chilled gazpacho soup on Wednesday, June 17th, Thursday the 18th and Friday the 19th.  Each demo will be followed by a three course luncheon – all for $30 per person, plus beverages, tax and gratuities.

If you can't make it for lunch, Tony has put together a special menu for dinners Wednesday June 17 – Saturday June 20th at a cost of $78 per person, with the option of spending an additional $40 for wine parings.  His menu includes:

Diners are not tied to this menu as La Panetiere will be serving from their regular menu as well.  Having just eaten dinner there this past weekend, I have to relate that their food continues to be the highest of quality and impeccably executed. And, as a sign of the times, they have a lower priced three course prix fixe menu for $45 per person ($63 including wine pairings) – hard to find at a restaurant at this level.

There are still spots left, so make your reservation by calling the restaurant at 914.967.8140 or go to opentable.com to reserve online.

– Diana Tapper (restaurant writer). Diana has been trying out Rye area restaurants since her move to Rye in early 2006 and has coordinated the Dining Around Town group for the Rye Newcomers and Neighbors Club for two years.