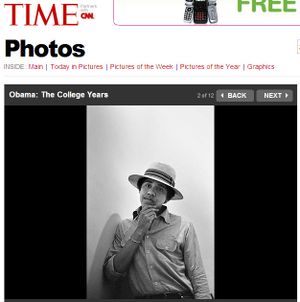 Back in 1980, then student, aspiring photographer and Rye resident Lisa Jack took photos of a fellow Occidental College student, Barry. Twenty nine years later, Barry – who now goes by Barack – is the President of the United States. Obama spent his first two college years at Occidental before transferring to Columbia.

Jack, who is now a professor living in Minneapolis, found the photos in her home. She released them to Time Magazine and just last Thursday opened an exhibit with the photos at the M+B galleryin Los Angeles.

In a report on the photos, the LA Times said:

"Her life and Obama's intersected at the Cooler, a campus snack shop.

The young woman from Rye, N.Y., loved her psychology courses but cared enough about photography to find mentors on the faculty who tutored her in independent study courses. With a blanket thrown over the couch she recalls as "a plaid horrible thing," the living room of the apartment she shared in a nondescript quadruplex near the campus in Eagle Rock became Jack's makeshift photo studio. Students from her circle of friends and acquaintances would pose for portraits that she would hand in as her weekly assignments.

That day a friend was telling her about a student named Barry she ought to photograph "because he's so cute." Moments later, the man himself walked in. He agreed to the shoot.

There was nothing out of the ordinary about the session, Jack says, although it impressed her that Obama had taken the initiative to bring the big, banded hat, a leather, bomber-style jacket with a fur collar and cigarettes as grist for her lens. "He obviously thought about how he wanted to have his picture taken." Obama shared at least one characteristic with the other students who sat for her portraits: "I think the thing that everybody was trying to portray the most was how cool they were."

Jack appreciated Obama when she ran into him that summer in a Honolulu nightclub — he a local, she a visiting summer student. "He was sitting there with a woman on each lap. They were babes, and I'm not a babe." But the president-to-be extricated himself, came over to Jack's table and chatted. That he'd show such courtesy while otherwise engaged "told me Obama was a cool dude," Jack says."