Sailing History at the Jay House 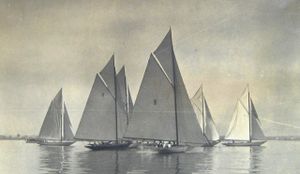 (PHOTO: artwork from an original 1916 scrapbook documenting the very first of the New York Yacht Club roaring forty regattas) When John Jay's grandson inherited the family's waterfront Rye homestead in 1843, the first thing he did was to buy a boat, "La Coquille." The very next year, in 1844, he formed a club at which to sail it when he and 8 other friends founded New York Yacht Club (NYYC). In 1845 Jay raced her in the first NYYC Regatta. And to top it all off, he hired the architect of NYYC's beloved first gathering place "Station 10,"  Alexander Jackson Davis, to make an almost identical replica of the clubhouse on the Jay Property so when he wasn't sailing himself, he could watch the regattas across the harbor at American Yacht Club from his perch on "Cherry Hill."

Learn more about the history of yachting in Rye and beyond at the Jay Heritage Center's "Legacy of Sailing" exhibit Sundays, 2-5, through August 30th.

A Legacy of Sailing:

Owners of the historic Jay Estate in Rye and their families shared a passion for the water and were influential members of the New York sailing community: John Clarkson Jay was one of the founders of the historic New York Yacht Club, owner of the yacht, "La Coquille" and an esteemed conchologist/ consultant to Commodore Matthew Perry following his 1852 -54 Expedition to Japan; Warner Montagnie Van Norden was also a member of New York Yacht Club.

Warner's father, Warner Van Norden, a member of the Holland Society, was one of the original organizers of the 1909 Henry Hudson Tercentenary that celebrated New York's most vital waterway while applauding the contributions of European culture to this state's development and commerce; Edgar Palmer, the famed Princeton philanthropist, owned several famous yachts including two schooners named "Guinevere" that were legendary for their state of the art technology — his family's loyal support of the allied war effort was reflected in the commissioning of both vessels to the US Navy in World War I and World War II for special escort patrol.

Visitors to the Jay Estate will learn about the rich history of yachting in New York and can enjoy the same pristine view of Long Island Sound from the 1838 Jay mansion that inspired these sailing families when they lived in Rye. Among the unique items that guests will see in the JHC’s “Legacy of Sailing” exhibit are: a rare 1836 treatise by JC Jay on shells with hand colored plates; an extensive collection of 1909 Hudson Fulton Tercentenary memorabilia including silver and bronze medals designed for the Chairmen of the Commission by artist Emil Fuchs; original engraved invitations, programs and silverware from Tiffany’s;  vintage photographs of the 1909 naval parade; 100 year old ship plans of the replica Half Moon and Clermont; original Edwin Levick photographs of the 1921 launching of Guinevere;  maritime photographs from Mystic Seaport’s unparalleled Rosenfeld Collection; an original 1916 scrapbook documenting the very first of the NY 40 design regattas from Long Island Sound all the way to Marblehead and much more.

The Jay Heritage Center is an official ambassador of the “Explore NY 400- Hudson-Fulton Celebration” — the Quad 400 — and it is also a new member site of the Hudson River Valley Heritage Area. “A Legacy of Sailing” is open Sundays from 2-5 pm beginning June 7th, 2009 and running through August 30th and by appointment. For more information or to arrange group tours, please contact the Jay Heritage Center at (914) 698-9275.