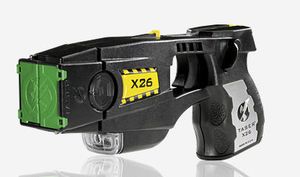 The Rye Police Department (Rye PD) has had tasers for the last three years. In the past, the two department tasers have been confined to Rye PD headquarters and to a patrol car operated by the on duty supervisor. Just recently, as discussed at the last city council meeting, the Rye PD has expanded the use of the tasers, allowing one of the tasers to be carried on the person of the on duty supervisor (or other officer if a supervisor is not available).

MyRye.com will highlight the "Taser Letters" all this week, so tell your friends and feel free to leave comments or point us to other original documents (you can contact us via email or broadcast a note on Twitter and call us out(@MyRye)).

In the first of the Taser Letters,the discussion centers around how an unapproved taser holster was being used by an officer. This Taser Letter is important for the other letters that become more acrimonious. The letter is from Police Commissioner Connors of the Rye Police Department to Police Officer and Rye Police Association President Franco Compagnone and dated April 2, 2009, the Rye PD states:

Read the first Taser Letter. Don't know how a taser works? Watch this taser video from the history channel.

Facebook
Twitter
Email
Previous articleBounces Off Me and Sticks to You: Rye Board of Ed Update on RTA Negotiations
Next articleThe Taser Letters: PBA Puts Rye PD “On Written Notice”