Rye Democrats have announced a bi-partisan slate for the fall elections. Here is the announcement as it was provided to MyRye.com. We'll have more details in the coming weeks and months. What do you think of this bi-partisan group? Leave a comment below.

Stressing longstanding success in community service and commitment to Rye, Mayor Steve Otis, Councilman Andy Ball, Myles Lavelle and Joe Murphy have announced their candidacies as a ticket for City Council this November. The bipartisan slate which includes two Democrats, a Republican and an Independent will run on the Democratic line. 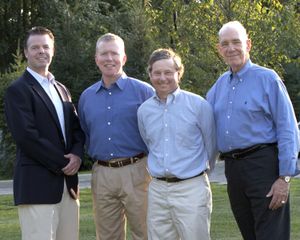 (PHOTO: City Council candidates Myles P. Lavelle, Councilman Andy Ball, Mayor Steve Otis, and Joe Murphy) Mayor Steve Otis shared his enthusiasm for the team.  “This is an outstanding ticket that knows Rye and has demonstrated a long-term commitment to serving our town. Successful community service is the best guide for choosing members of the City Council. Andy, Myles and Joe know Rye and know how to get results.”

In a joint statement the four candidates said, “We are committed to maintaining quality services while addressing the macroeconomic challenges Rye will continue to confront.  The four of us will strive to responsively navigate the City through the changing economy while maintaining our infrastructure, reducing costs, controlling taxes, and protecting Rye's strong fiscal position. We will be aggressive in seeking outside funding to pay for needed local projects and will continue to work with City staff, volunteers and not-for-profits to help preserve our quality of life.”

The ticket is led by Mayor Steve Otis who has earned a reputation as one of the most knowledgeable and experienced governmental officials in Westchester County.

Councilman Andy Ball commented, “Clearly the Council will be faced with significant challenges and difficult decisions over the next few years.  Steve’s deep knowledge, experience, and continuity with the issues will be more valuable to Rye than ever before.”

Otis brings unprecedented experience for a local government official with 29 years of experience in State government, as a former president of the Westchester Municipal Officials Association, with a masters degree in public administration, a law degree and over twenty years as a volunteer in Rye. Prior to being elected as Mayor, Steve served as Chair of the Conservation Commission and as a supporter of numerous projects and not-for-profits. Steve’s experience allows him to achieve results for Rye at the federal, state, county, and inter-municipal levels of government. Steve is seeking a fourth term as Mayor.

Now in his fourth year on the City Council, Andy Ball has been recognized by his Council colleagues for his preparation and deep knowledge of issues facing the city and applauded by the public for his thoughtful approach to the City’s business.

In 2006, Andy was a leading voice in the Council’s actions to protect residents of Highland Hall from being displaced.  A consistent advocate of the need and economic case for rebuilding Theall Road, he was key to the Council’s resolving to undertake this long-deferred project.  Andy has been a proponent of a number of successful projects, including flood mitigation initiatives and the road diet for the Boston Post Road implemented last year.  Over the past four years, he has brought sound, independent judgment to city finances and land use issues.  Andy has served as liaison to the Board of Architecture Review, the Landmarks Advisory Commission, The Rye Recreation Commission, the Rye Senior Advocacy Committee and the Zoning Board of Appeals.

The tradition of service to Rye runs deep in Andy’s family. Since arriving here in 1851, generations of the Ball family have served in both the Rye Police and Fire Departments. His brother Dave is a teacher and coach at the Rye Middle School, and his father, Bill Ball, served two terms on the City Council and, among other things, was instrumental in Rye’s successful fight against the Rye/Oyster Bay Bridge in the 60’s and early 70’s.

Andy is currently an Executive Vice President with Grey Advertising in Manhattan.  He and wife Sarah have three children.  He is registered as an Independent.

Myles’s volunteer service goes beyond youth recreation programs. He has been a volunteer and sponsor of P.O.T.S. (Part of the Solution – Soup Kitchen) sponsored by the Church of the Resurrection.  He has also been a sponsor of the Pathfinders for Autism program, the Rye PBA, the Y-Me Breast Cancer Coalition, FDNY 9/11 Widows and Children Fund and was a participant on the Leukemia and Lymphoma Society’s Team in Training, completing the Staten Island Half Marathon.

Myles comes to City government as an executive with a strong financial analysis background who provides research services to institutional investors and corporations, including the information technology and clean energy sectors. In his work Myles is also a financial advisor to EcoVoltz, an innovative company providing cutting edge technologies for reducing energy consumption, increasing efficiency, and offering new green technologies in the home. Myles is currently a Managing Director with Broadpoint AmTech in Greenwich, CT.

Myles grew up in Rye. His father Jim was also a president of Rye Little League. He and his wife Nancy have four children.  Myles is registered as a Republican.

Myles added, “With my volunteer work in Rye and business background, I am confident I can make an added contribution to Rye on the City Council.  My goals will be to implement needed projects for flood control and the central business district while maintaining Rye’s Aaa bond rating and controlling taxes.”

Joe Murphy has served Rye in key positions for many years, including ten years on the City of Rye Conservation Commission, six as Chair, co-founder of the innovative Rye Senior Advocacy Committee whereby the City brought volunteer expertise and information to Rye seniors.  Joe is a former Commander of Rye’s American Legion Post 128, a former member of the Board of Education, and  has also served on the City of Rye Financial Advisory Committee.

Joe has served as Chair of Congresswoman Nita Lowey’s Service Academy Review Board since 1989. As a Licensed Clinical Social Worker currently serving as the Senior Care Manager for ElderServe's Safe Center for Seniors, he resolves many problems facing seniors, caregiver, and their families, identifying innovative solutions at the most efficient, cost effective alternatives by networking with a myriad of community resources.

Joe is married to Camille S. Failla-Murphy. Their three children attended Rye schools. Joe is registered as a Democrat.

Joe Murphy added, “The community of Rye is one of Westchester’s model municipalities and has achieved this reputation by identifying sound, committed leaders who bring to the City Council and its many Commissions, Boards and Committees, persons of dedicated service and intelligence.  We must continue this tradition by making the decisions that warrant merit and a vision to enhance the quality of life for all residents.  We have witnessed the many improvements under the leadership of Mayor Otis.  He and other members of the Council have made the decision to effect the positive changes.  Now we must seek the best alternatives to solve the more pressing problems of sustaining services within the parameters of sound fiscal planning.  Our council leaders must focus on solutions in the contest of vision and determination.  Running with Steve, Andy and Myles I know we bring the talent to deliver for Rye.”

Steve Otis for Re-election as Mayor

Leading the ticket is Mayor Steve Otis whose tireless work to bring community projects to fruition is matched with aggressive efforts to seek outside public and private funding to make them happen. Steve’s knowledge of how government works has greatly benefited Rye in many areas.
Otis has implemented a long list of successful projects marked by innovation, skill in securing outside funding through grants and public/private partnerships, and sound financial practices to minimize costs to taxpayers.

Recent accomplishments include Rye’s selection as one of only four communities to receive county flood mitigation funding which will provide $1.1 million towards the City’s sluice-gate project at the Bowman Avenue Dam, securing agreement from the NYS Thruway Authority to lease an important parcel on the Boston Post Road for use as an athletic field, spear-heading the City’s efforts to acquire the Bird Homestead on Milton Road with a series of outside grants and private dollars with no City tax dollars, and guiding approval of the September 11th Memorial Gazebo project to be built this summer. In 2008 the City implemented the innovative road diet on the Boston Post Road, as well as new traffic safety improvements around the schools.

After the floods of 2007, Otis lobbied Westchester County to establish a flood mitigation fund to assist local governments in implementing needed projects. Otis was appointed as a founding member of the County Flood Action Committee and has played a key role in advocating for flood assistance at the federal, state, and county levels. In addition to the sluice-gate project, Rye has repaired the brook wall at Elm Place funded with over $1 million of outside funds and dredged Milton Harbor at Blind Brook, partially funded through FEMA. With the adding of the Thruway Property, City of Rye Recreation Department playing fields will have risen from six to ten under Steve’s leadership.

Otis’s long list of successful projects include acquisition of Rye Nursery, the Duck Pond expansion project at Rye Town Park, creation of innovative volunteer committees, such as the Traffic and Transportation Committee and the Rye Senior Advocacy Committee, saving the Rye Nature Center from closure, rehabilitation of the City’s two firehouses, rehabilitation of the City’s police firing range, obtaining county funds for the skate park at Rye Rec Park, and restoration of the pavilions at Rye Town Park funded through a public/private partnership.

Otis counts among his accomplishments important efforts to protect Rye. He has led the countywide opposition to the proposed highway tunnel that would bring Long Island Expressway traffic under the Long Island Sound and to Rye. Steve led the successful City defense against Home Depot’s $50 million lawsuit against Rye, which began before Otis was elected. He has led City efforts to protect Rye when neighboring communities such has Harrison and Rye Brook take actions that increase flooding in Rye, and has been steadfast in opposing efforts by telecommunications companies to place cell towers in residential neighborhoods.

Steve and his wife Martha live on Lynden Street. Steve is registered as a Democrat.
Steve concluded, “I am as excited now about using my experience to benefit Rye as I was when I began. We have projects and challenges that must be addressed in a fiscally sound manner. We have flood mitigation improvements, infrastructure responsibilities, and safety concerns that we need to meet in an affordable way. I am eager to use my skill to face these challenges.”

City of Rye Democratic Chair Rod Brown summed up the slate; “We have assembled a bipartisan ticket with the goal of offering the community individuals with a long commitment to community service. These candidates have been leaders, by example and deed, and will serve Rye well.”
The Mayor and City Council members serve as unpaid volunteers for four- year terms.