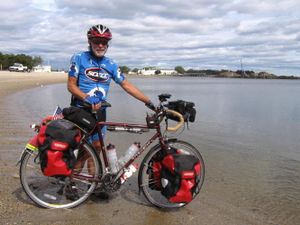 Bart Coddington will have the best stories at his high school reunion. No doubt.

We told you about Coddington back in July. He's a Rye High School grad who spent the last 90 days biking from Aptos, California to Rye, New York in order to attend his 50th high school reunion. He arrived one day early. Judging from his post about his last day, we think the Safe Routes to School and Activate America programs would be interested in having Bart stick around.

Bart has been invited to "bike out" the football to the referee at Friday night's Garnet game.

It was a real fall day here in NY, which was good as I was sweating some hairy roads coming into Rye. Most of these roads have not been widened since the 1940's or earlier. With lots of full size SUV's on the roads, there is no place for a bicycle. Many roads have curb's that prevent a bicyclist from 'bailing out' when needed. Today was the most nervous I have been on the whole trip about getting hit by a car.

The other factor is NY drivers attitude. Instead of waiting 5 seconds until the opposing car passes, they just squeeze through. Nobody hit my flag that I know of, but some were very close.

I will not complain about our roads in CA any more. Most of the roads the last 2 days have had dangerous edges. Lots of missing pavement and very poor patching. When you have no shoulder it is a real dance with the cars and getting around spots that could throw you off your bike….

On the way back to the Marriott hotel I passed Midland Elementary School. The not very big bicycle rack had 6 bicycles. The street was lined with cars with single drivers waiting to pick up children. Maybe if Rye had safer roads, more children would ride to school rather than being driven in a car.

I got an email today asking if there was a way to attach two 3'X5' flags to my bike Friday night. I am going to have to ride like a mad man to get them flying. I sure hope I do not fall in front of everyone."

Rye Boys Varsity Soccer put Ardsley through the saw mill on Saturday, stacking a 2-1 win over the Panthers at home. "We came out on...
Read more
Girls Varsity Soccer