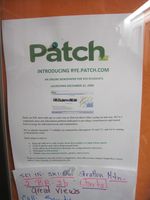 AOL's Patch.com, the company's effort at hyperlocal journalism, is opening its Rye web site today. Our friends Chris Falcone and Paige Reintz over at The Rye Soundshore Review have a good write-up on what is now seven media outlets for Rye City's 15,000 residents.

Does Rye have too many media outlets? What do you think of the new player, AOL's Rye Patch? Leave a comment below.

We asked Mark Lungariello, managing editor of Home Town Media Group (publisher of The Rye Soundshore Review) what he thought of the Rye version of Patch.com if if he regards them as a friend, enemy or "frienemy". "We don't look at any media, including patch.com, as enemies. In fact, I like to think we are all on the same page – excuse the pun – in that we share a passion for the city and keeping its residents informed," Lungariello told MyRye.com. "The fact there are about a half a dozen news outlets in a city this size speaks volumes about Rye and its reputation in Westchester and beyond."