Recently Rye High School and Middle School attendance is going to the birds.

Recently the school, thanks to a number or organizations, completed two reforestation and landscaping projects. Thanks to Steve Feeney for sending MyRye.com this comprehensive update. 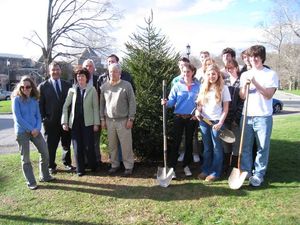 It is expected that a Spring 2010 planting will complete the phases of the project fronting both Parsons Street and Milton Road.  Independent fundraising by the Environmental Advocacy Group and the Rye High School Class of 1967 was matched by the Rye Board of Education to cover the procurement and installation of the Phase One trees.

After years of inattention, the barren façade of the Rye Middle School wing facing Blind Brook and Nugent Stadium was finally landscaped with appropriate trees and shrubbery by a joint partnership of the Rye Middle School Parents Organization and the Alumni & Friends of Rye High School.  The joint effort was able to complete all planning, purchase and planting of twenty-eight bushes, shrubs and trees for less than $1,000. The labor and materials, except the plants and mulch, were donated by the Alumni & Friends of Rye High School.

MyRye.com also heard from Mason Curtis, president of the RHS Environmental Club who told us "Trees are essential in the greater web of nature.  They cover the earth's surface and are the hub of many ecosystems.  Students should be allowed to witness the presence of nature at school.  Watching a tree mature over time or lose its leaves every year is just as essential as the knowledge of how a math problem is solved. Without trees on the school property, the school itself would lack the ability to provide a balanced environment that is filled with nature and reminders of nature's essential role in every person's life."