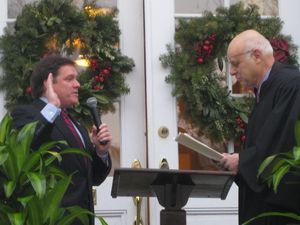 Thank you and thank you for being here today.  I am honored and humbled to be Rye’s next Mayor.

What makes it extra special for me is be up here with these two gentlemen, Judge Lane and Mayor Otis.

Peter Lane was the first person I called 20 years ago to begin my public service career in Rye.  I don’t think either one of us envisioned that 20 years later he would be judge and would be swearing me in as Mayor.

Judge Lane has served this City with great distinction for 17 years on the bench and it is an honor to have him here today.  By NY state statute, he is retiring today as Rye City judge.  Peter on behalf of the citizens of Rye, thank you.

And Mayor Otis.  Steve has served our City for 12 years with integrity and grace.  We will honor him and his accomplishments another day, but I want to congratulate him on his service and thank him from the City.

I also want to commend outgoing councilmen Andy Ball, Mack Cunningham and George Pratt for their leadership and public service to Rye.  Gentlemen, thank you.

And personally, I want to thank Carrie, my wife, who shares in this day and is as much a part of my becoming Mayor as I am.  Thank you, Carrie.

But today, we look ahead and begin the New Year and the new decade with a new council and a renewed sense of optimism.

And as we stand here today there is much to be proud of about our City:

• We share a rich heritage that ties our generations together

So, on behalf of the incoming council, we greatly look forward to 2010 and serving the citizens of Rye. I will have more to say in my “State of the City” address Wednesday night, but thank you and Happy New Year.