The Board that reversed the Administration’s proposed reduction last year and disbanded the joint Budget Analysis committee (BAC) has, again, utterly failed to stem the multimillion waste and over-taxation that started in 2001. NO is the answer! As promised, we are going to spell out some waste items, obvious or logical, and how we may help build a budget that starts cleaning up while enhancing sustainable education excellence.

But first, a more extensive comparison of yearly budget, tax rate and enrollment (1994 base 100). The tax rate is naturally somewhat corrected for inflation, which was low through the period. I thank a MyRye reader for requesting such a refinement, if only by difference with the uncorrected budget. I also add recent 2000-09 data on the national tax rate (federal + state + local) from the Bureau of Economic Analysis quoted in USA Today, pointing out that the US enjoys its lowest taxing level since 1950, the lowest among rich OECD countries. A possible surprise to “Tea Party goers”, this is no cause for pride since our huge deficits mean debt to China, Saudi et al. In any case, our state is the highest taxed, and wastes much of that on counties which Connecticut and Massachusetts eliminated to their advantage. Yet I feel this addition makes another strong point about why Westchester and Rye Schools need to sharply reduce their predatory property taxes. 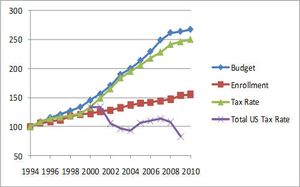 There is an immediate way to start this process in our school district, “as far as possible from the students” (a valid District mantra from both Board and Administration), by eliminating the huge over-taxation from excess margins. This will have absolutely NO IMPACT on education, programs, special education, or staff employment.

Analyses supporting in detail the potential savings proposed in January 2009, were provided to Board and Administration in February and March 2010 by former BAC members, acting as a Budget Analysis Citizen Advisory Group (BACAG). Potential immediate savings were found, again, in the $8-10+ million range, or 11-14% of the $69 719 000 adopted by the Board for the 2010-11 budget. Of these, excess margins account for $2.3 to 4.3 millionwhen combining our analysis of the largest items ($2-4 million in salaries, benefits, revenue-other-than-property tax) withBob Zahm’s $300,000 proposals on smaller items starting at the other end of the spectrum.

Waste #1 ($2-4 million): Excess margins of $2-$4 million/y were embedded after 2000 in salaries, benefits and revenues-other-than-property tax, averaging $2.6million/y and cumulating to $21 million over 8 years. About 2/3 of this “slush fund” was wasted on the never-budgeted Osborn litigation costs and reserves. The Board acclaimed the Court decision… and reimbursed $2.4M to Osborn in August 2008. This Board still refuses to entertain settlement discussions desired by Osborn, and by our City which pays an additional 22% of costs in cash and counsel services.

Unfortunately Zahm’s proposals to the Board a week before the Budget Adoption meeting, were turned down except for a meager $13,000, and he resigned, a true loss to sustainable excellence.
Similarly, just like last year, our own efforts were spurned, even repeatedly laughed down when we questioned spurious electives such as Orienteering or Orientation to Law in 6th Grade. Yet, wasting money and time on such “gut courses” is an insult to our students, to parents concerned with real education, teachers who teach real core curriculum courses in languages-math-sciences-history-geography, arts and phys. ed., and to taxpayers who bear the highest property taxes in the nation. In a revealing comment, the last BAC chair justified these “lite” offerings with a “But we need to keep students busy through their mandated class time!”…

Budget reduction and planned staff attrition will be the best message to send to an RTA still unconscionably clinging (Taylor Law) to lavish benefits to which they contribute preciously little, and to the bloated 8.1% average annual salary increase improvidently granted in “better times”.

Our proposed 3-6% reduction (with a minimum -2%) is spanned by Bronxville’s -1.8% (laying off 30 staff and streamlining programs) to Briarcliff’s -6% to $49.5M, laying off 42: 25 teacher aides, 3 administrators, 5 security/custodians, 7 pupil support and clerical staff. Smart peer districts in Westchester, Long Island and SW Connecticut do the same. Teachers contracts less than 2 years old are reopened to reduce salary increases (and layoffs) and increase employee shares of benefits costs. Many compensations are frozen for a year plus. Yet this budget seeks a rise to spend $22,000/student, 2 and 2.5 times the average in Connecticut and Massachusetts which top the nation in education, 3 times the cost of a top international charter school in Iowa.

If short of time, readers may stop here. Let a resounding NO tell the Board their budget increase amidst such clear waste cannot be tolerated. Let a revived BAC, with trustees, parents and non-union educators joining with our BACAG, start immediate work on other savings (see below), investments and budget reform (multi-year actual-audited, forward plans, et al.) for next year.

As they are jointly assessed and adopted, the $7-9 million in additional savings outlined below may be allocated over a few years, again in a specific and open manner clear to all concerned, to
-  carefully optimized, transparently managed, legal reserves for liabilities that cannot be bonded;
-  serious investments (science labs, regulatory sports field: $5-7M bond windows in 2013 & 18);
-  “return to taxpayers” as one temporary reserve is gratefully called in the Scarsdale District.

Only then can all parties look at each other, reassured that sustainable education excellence for our current and future students will be maintained and enhanced with minimum wastage, while reducing our woeful 2-2.5 property tax multiplier over nearby Greenwich, CT.