Today MyRye.com is carrying a guest column from Bertrand de Frondeville on his NO vote for the school budget on Tuesday, May 18th. What do you think? How will you vote on the school budget? Leave a comment below.

CAN anything but a resounding NO stop the wasting of MILLIONS in school budgets?

Many thanks to MyRye for fostering an informed discussion of critical issues in our community.

I was impressed by Charmian’s spirited plea for a budget reduction a month ago in hearings, and then by Bob Zahm’s hard look at unnecessary margins in small items cumulating to $300,000 in easy savings without the least impact on student, staff or programs. I am all the more puzzled by the inaction of Board and Administration. At least last year, the Administration started with a proposal for a small budget reduction, which the Board managed to reverse. This year, they started by disbanding the Budget Analysis Committee of trustees, administrators and citizens…

Despite this practical gag order, all concerned received through February-March analyses of savings of $8-10 million, including 2-4 million/y of excess margins or over-taxation that plague us since 2001. Similar savings were identified in January of last year when I was challenged to list on paper the waste and potential savings by Ed Fox, then Budget Analysis Committee chairman.

These upward corrections may be much higher after the audit of next October. This is because excess margins estimated in the budget books have been for many years a fraction of actual-audited margins. The 2008-09 excess margin was audited as $3.82 million last October, 7.35 times the $507,406 estimated in last year’s 2009-10 Budget Book. Applied to the current 2008-10 year, a similar audited margin would mean this 2010-11 budget would be 7.3% over actual-audited 2009-10 expenses. That is SIX (6) TIMES the enrollment growth!

Then, the very Board that reversed the Administration’s proposed reduction last year has, again, failed to stem the multimillion waste and over-taxation that started in 2001 as illustrated below. 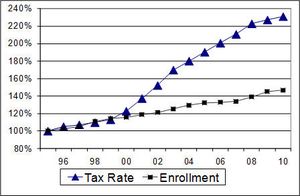 The mantra of Albany being the scapegoat for every ill wears thin. Our NY Congress is indeed a national disgrace, and we may agree with changing all its members next election, except for George Latimer who, with Judy Myers, demonstrates in regular open meetings keen attention to his constituents and an awareness of the dysfunctions. But Albany is no excuse for inaction.

Previous Boards always claimed that their hands were tied on the payroll, by far the major part of the budget. We kept reminding them they were the ones negotiating contracts, and not Albany, although the Taylor law is not helping. Fortunately this Board has held the line for 3 years, but the excuse is now that the union is unreasonably holding negotiations. This is true indeed but easy to alter. Even freshly-minted contracts are being reopened to reduce salary raises and augment the employee share of benefits, as an alternative to larger layoffs. Besides trimming excess margins, our proposals include logical waste reductions that can lead to over 35 layoffs, both a powerful message to union negotiators, while enhancing sustainable education excellence for current and future students.

The Albany excuse may explain the alleged “$755,000 cut in addition to over $1 million cut last year”. To throwing numbers based on shaky assumptions on what is in Albany’s control or not (they have barely started to acknowledge the corruption among their own, let alone control it), we prefer simple arithmetic. On the p.10-1 bottom line budget-to-budget increases are $896,000 in 2010-11 ($1.625 million over estimated expenses, more after audit) and, again, $571,190 in 2009-10 ($1.1 million over estimated expenses and $3.82 million over audited 2008-09 expenses). Putative “cuts” morph into actual increases of millions on top of the cumulative $21 million built up since 2001 in excess margins that averaged $2.6 million/y through 2009.

Shall we keep using Albany as our scapegoat, or work on controlling our own multimillion waste?

Another repeated assertion is that our tax rate in Rye is the lowest in Westchester. If that is real, why are so few district employees Rye residents? Reality is a house in Rye or Scarsdale bears 2-2.5 times the property tax of a similar house of similar price a few miles away in Greenwich, CT. Do ever higher “education investments” truly benefit property values when millions are wasted?

Indeed, how such intelligent and obviously dedicated people as our Rye City Schools Trustees can preside year after year over some $8-10 millions of waste of our hard-earned money defies imagination. All the more when the same people are courageously holding the line in negotiations with the Teachers’ RTA for the last 3 years, to reduce the improvident 8.1% annual salary increase, augment the small employee share of retirement payments and health premiums, challenge the 183 days at 4.5 hours class time before overtime kicks in, etc., etc.

For this waste alone, and other reasons, we need another NO Vote May 18 on the 2010-11 budget to awaken Board and Administration. Together we can then start clearing the waste and return to sustainable and responsible education excellence, in these difficult times for all.

I do not want to tax the reader any more at this time, and will soon come back with details on waste and savings, and how we may combine clearing out the first, and phasing in the second, while wisely investing in our present and future students, and even our “property values”…

Meanwhile, I’ll be glad to answer questions with supporting material to everyone interested.
Bertrand de Frondeville