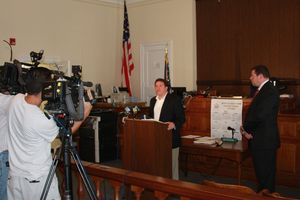 UPDATE: attack was on LaSalle Avenue in the Glen Oaks neighborhood. There is also a report of a coyote sighting Friday afternoon on Florence Avenue nearby. Earlier in June a MyRye.com reader reported a coyote sighting at Rye City Hall.

The 6 year old Rye girl was attacked Friday night by two coyotes. The girl – a resident of the Glen Oaks area and an Osborn kindergarten student – is OK and home from Greenwich hospital.

According to Rye PD the girl was playing with others in her side yard in the Glen Oaks area of Rye when the two coyotes approached and "tackled her" according to Rye PD Commissioner Connors. The girl's mother was alerted and the coyotes were scared off in what sounded like just a minute or two. The girl was treated at Greenwich hospital for bite wounds and lacerations and released around 3am last night. Rye Police Commissioner called the girl "a very brave young lady" (note to six year old: save this quote for when you get pulled over in high school!). 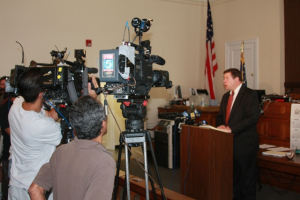 Rye PD pursued the coyote with some real manpower onto the Rye Golf Club grounds just across the Boston Post Road from the Glen Oaks area. The pursuit involved Rye PD, the Rye Fire Department who helped "light-up" the area and the Westchester Police helicopter that is equipped with "heat seeking" devices. The "Wile E Coyote(s)" evaded pursuit.

The Commish told the rabid press crowd that "coyotes are a fact of life" and "a coyote wandering down the street is just part of the landscape". The city did say they had engaged a private trapping firm and just recently trapped a female and eight pups using a combination of humane leg hold traps and cages (the animals were relocated far away). In response to a question from MyRye.com, the Commish said the den of Coyotes was on the grounds of Rye Golf Club in an area of Soundview down by the water.

The city declined to name the private trapping firm however the Commish did say they continue to work with the firm to place human leg hold traps in various areas in Rye including the Osborn home area and last week in the vicinity of Johnson Place. Rye City says the traps are in remote areas but that if they have any concern about people coming across these traps, signs will be posted.

Toward the end of the news conference, Commissioner Connors did seem to say the rules of engagement between his officers and wild animals have changed. The Rye PD routinely dispatches (AKA shoots) rabid, injured or aggressive animals (such as raccoons). He did not say officers would shoot animals on sight, but clearly they have more license to respond than they did before this incident.

Connors did remind residents that coyote attacks are extremely rare and that by comparison there are 650 dog attacks and one dog attack resulting in death each year in New York State. He encouraged residents to read the city's coyote fact sheet and to call 911 or the Rye PD on 914-967-1234 if they see any coyotes.

The 2nd Annual Meals On Main Street (MOMS) run is Sunday, October 16th at 8am. The family-friendly 1.5 mile fun run and the 5K...
Read more
City of Rye