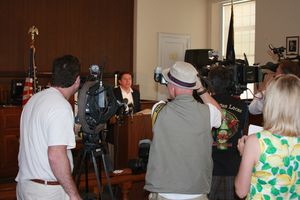 Rye Mayor Doug French wants residents to know he is howling about our coyotes-he sent along his comments from this morning.

As the police have reported, the City of Rye has had a second coyote incident.  I can report that both girls are fine and doing as well as can be expected.

As to why this has happened and the fact that it is so rare – we will continue to consult with wildlife experts.  However, the most important fact is that we have had 2 attacks on children in 4 days.

To be clear, the equation has changed and this is a threat to public safety and we are treating it as such.  We are on high alert and have moved quickly to take additional measures in terms of aggressive trapping and hunting.

We are working closely with Westchester County and their contiguous properties and have additional resources in place.  The state Department of Environmental Conservation has been actively engaged and will be sending resources tomorrow.  We have also spoken with the office of Nita Lowey to seek Federal assistance.

We ask our citizens to be on high alert and to follow the precautions outlined by our commissioner to keep small children nearby, act aggressively if confronted by a coyote, and report sightings.  It is illegal to fire firearms in Rye so please leave that to the professionals.

Like many Westchester communities, along with the rise in deer and wildlife population has come an increase in coyotes.  For the most part there has been normal interaction with humans in suburban areas as fewer than 10 attacks on humans reported each year nationally.

We will continue to update the public via reverse 911, the media and our nixle.com service as well as will be holding another public information forum to be announced.