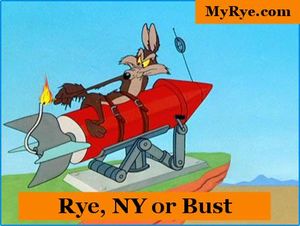 Thanks to MyRye.com reader Tim Kirby of Orchard Lane, who sent us this report of a coyote encounter at Rye City Hall:

"While recent coyote encounters in Rye have been well publicized, I was surprised to come up against one last night [Monday, June 7, 2010] in the parking lot between the Rye Free Reading room and Lesters.

While walking my 24 lb dog at 9pm last night, we came upon a coyote in the back of the parking lot next to the brook.  I looked up and there he was just 10 or 15 yards away walking right towards us.  I started walking backwards with my leashed dog towards the Boston Post Road and the coyote kept following us at a distance of about 10 yards.  Even upon reaching the sidewalk, he showed no fear and kept following us.  I picked up my dog and eventually the coyote crossed the BPR and disappeared.

I am confident the RPD is doing all they can to deal with the problem. But, I wanted to make sure others in the area know how close they are to town and the library lawn where many people and animals congregate in the evening.  Most surprising of all to me was that the animal showed no fear of humans or the cars passing by on the BPR."

Rye has posted a "coyote fact sheet" that states:

Residents of Rye take great pride in the natural endowments of our community: one-fifth of the City’s land is dedicated to recreation and conservation. It is important to remember that we share these areas with the animals that inhabit them; a variety of animals are found within our community, including deer, fox, rabbits, raccoons, and coyotes.

Coyotes are hunters, and primarily feed on rodents, insects, and small animals, including rabbits, squirrels, and small deer. They are normally timid around humans, but some coyotes in suburban areas have lost their fear of people, which can be dangerous. It is important to act aggressively to maintain that natural fear.

WHAT YOU SHOULD DO:

If you encounter a coyote, be aggressive. Loud noises and forceful behavior will normally scare the animal away. Wave your arms and throw sticks or stones.

Coyote attacks on humans can happen, although they are rare (for example, in an average year in New York State, 650 people are hospitalized and one killed in dog attacks, vs. a handful of coyote attacks nationwide). The mere presence of coyotes in our community is part of the ecology of the area, and not dangerous in itself; however, the animals’ behavior should be monitored to ensure that they are not acting dangerously or aggressively, or exhibiting a lack of fear.

Additional information on coyotes can be found on the New York State Department of Environmental Conservation’s website.