Someone is trying to make their mark on history and the Jay Heritage folks are not happy.

JHC folks discovered bright red graffiti had been spray painted on the Barlow Lane perimeter stone wall which is about 5 feet in height. The wall is at the intersection of Boston Post Road and Barlow Lane at the entrance to the Greenhaven neighborhood. 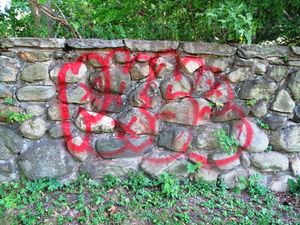 In a statement Jay Heritage Exec Suzanne Clary pointed to the poor management and upkeep of the Jay property by Westchester Parks as a cause of such vandalism. Earlier this year the JHC had to go after the County Parks Department to remove poisonous fill it placed on the site.

There is no love lost between JHC and the County Parks folks. In a statement JHC exec Suzanne Clary said:

"The unkempt appearance of the Jay Property has worsened during the 18 years that it has been managed and operated by Westchester County Parks and New York State Parks. This criminal act underscores the urgency with which intervention is needed to safeguard the park which due to its dilapidated state looks abandoned and invites further destruction and trespassing.

The Jay Heritage Center has reached out to local officials and the new Westchester County administration in a cooperative effort to help prevent recurring incidents of vandalism like these. JHC appeared at Rye City Council meetings in March 2010 to voice concern about the continued deterioration of John Jay's home and the Rye City Council responded in passing a unanimous resolution supporting JHC. The entire 23 acre Jay Property, (once also known as Alansten,) is a protected site under the Chapter 117 of the City of Rye's own local Landmark Preservation ordinance which includes the Jay landscape, the viewway to Long Island Sound and the stone walls that surround the property.

JHC made a proposal to the new County Executive and NYOPRHP (New York State of Parks, Recreation and Historic Preservation) this past July. Our proposal stated that JHC would assume the burden of raising and spending the funds and monitoring the work to properly restore the entire 23 acre Jay Property in a historical and environmentally sensitive way following the recommendations of an award winning Cultural Landscape Report (CLR). This report was completed in 2004 and representatives from the City of Rye participated in it. Recommendations from the CLR include among other things fixing all the stone walls, removing invasives like poison ivy and planting native trees and shrubs  – essentially making the property a usable and safe park for Rye residents and the public. This private/public partnership would not cost Rye or Westchester taxpayers anything. But it would finally create the beautiful park that was envisioned so many years ago by thousands of people who fought to save the place.

JHC anxiously awaits a response from the County and OPRHP. The City of Rye is already on board as indicated in their unanimous March 2010 resolution supporting our stewardship of the site."

Note: Clary is a history columnist for MyRye.com.