Theresa Juva, the Rye City reporter for The Journal News, is working her last day today at the newspaper. She'll be joining the staff of AM New York, a free daily paper in Manhattan to cover the MTA. We wonder if the MTA has Mr. Floatie type characters at their public meetings. 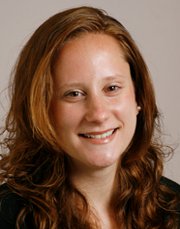 MyRye.com caught up with Juva in her waning days and asked her about the experience covering the Garnet nation. Taking Juva's mantle is Andrew Klappholz.

MyRye.com: Theresa, you have covered Rye City as a reporter for The Journal News for 2 1/2 years.  What are the three most memorable stories you covered?

The first stories that come to mind are Bob Schubert and his pond, Mr. Floatie at the City Council meetings, and the council and mayoral election in 2009. All of them had surprising and unusual twists and turns. For a journalist, that’s golden.

What surprised you—good or bad—during your years covering Rye City?

Growing up and living in Queens, I wasn't sure what to expect coming into the Westchester suburbs as truly an outsider. While I'm sure I've irked some people with stories I've written, whenever I have stopped random people on the street in Rye to discuss an issue, they are almost always very kind and helpful.  It means a lot to a reporter when people respond to you well as both a person and professional. Even elected and city officials I've pestered and wrote critical stories about have still treated me with respect and professionalism.

Who are some of the most colorful characters in Rye—the people who stand out (good or bad!), the people who have helped you understand Rye?

There are many people I won't forget, such as former Mayor Steve Otis, Ray Tartaglione, Bob Schubert and Jimmy Amico. I also enjoyed my long chats with Charmian Neary, who gave me a wealth of insight and ideas.

What do you think it takes to be a great local reporter? What’s different about local vs. other reporting jobs?

You have to be curious about everything, even if it seems insignificant. It doesn't mean you write about every time someone sneezes in City Hall, but as a local reporter, you have to be willing to focus on the details. You have to become part of the landscape, observe people, roam the streets, read bulletin boards and listen to what people have to say. You have to be a great listener. As much as you have to "find" stories, stories will also come to you.

What’s the latest (time-wise) Rye city council meeting you ever attended and what made it run so late?

I have to say I think my record for latest meeting goes to Harrison. Last December the board didn't pass the budget until about 2 in the morning, after a six-hour meeting. Somehow I managed to take notes at that hour.

[Publisher's note: we hate losing to the Huskies… even for the longest meeting. Won't happen again…]

For a city of 15,000, Rye is teeming with local media outlets—The Journal News, Rye TV, The Rye Record, The Sound Shore Review and others—what’s the story with this place?

I guess no one can say journalism is dying. It's great that people in Rye have plenty to choose from when they want to know what’s going on. I think the recession has shown that people are rekindling connections with their local communities. I think civic engagement in on the rise.  Unlike in the past when economic times were good, people are now paying more attention to what their local city and school officials are doing, especially when it comes to how their tax money is being spent.

You are leaving The Journal News to be the MTA reporter for AM New York, a free daily newspaper in Manhattan. The former MTA chairman H. Dale Hemmerdinger lives on Island Drive in Rye. Will you be calling him in your new capacity?

I'll have to see, but thanks for letting me know where he lives, just in case! 🙂

Are there any similarities between Rye and the MTA? What do you think it takes to get the MTA to install a STOP sign?

Will you be taking the subway to work?