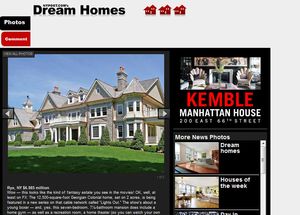 The home is not in Rye, but is actually a "Huskie Hangout" – 10 Rockledge Road in Harrison with a Rye PO. Hey Postians, how about a little fact checking?

Here is part of their gooey and misleading write-up:

"Rye, NY $6.985 million
Wow — this looks like the kind of fantasy estate you see in the movies! OK, well, at least on FX: The 12,500-square-foot Georgian Colonial home, set on 2 acres, is being featured in a new series on that cable network called “Lights Out.” The show’s about a young boxer — and, yes, this seven-bedroom, 7½-bathroom mansion does include a home gym — as well as a recreation room, a home theater (so you can watch your own house on TV in style) and a wine cellar. And that’s just the lower level…"