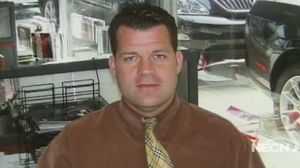 In his LinkedIn profile, former Rye Ford car salesman Nicholas LaHines says "I am extremely smart in many different area's…. I have a Knack for making money, and see a dollar sign on everything… If I wasnt making great Money Selling Cars I would be making great Money Doing something Else…" and "I am too smart to make other people money, so why shouldn't I make my own money, on my terms??… You name it I can do it….."

(NECN: Brian Burnell, Bridgeport, Conn.) – This police presence is mild compared to what people who live in this small condominium complex in Bridgeport, Connecticut, saw late Thursday afternoon and into the night.  They say unmarked cars carrying FBI agents swarmed the street with agents moving in on 67 Riverview Drive, the home of 37-year-old Nicholas Lahines…

He was arrested Thursday in a parking lot in the Bronx after authorities say he sold eight pipe bombs to undercover officers.  All the devices are described as chemicals encased in aluminum and topped with a firecracker-like fuse…

People who live here in the neighborhood say the suspect was an out of work car salesman who worked in a dealership across the line in Rye, New York.  We called the dealership and they confirmed that."

Have you ever bought a car from Nicholas LaHines? Leave a comment below.

Here is the NECN report: