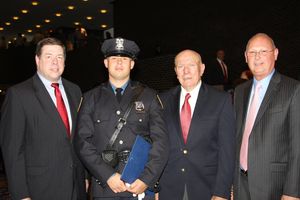 The newest member of the City of Rye Police Department has completed his Police Academy training and has reported for duty.

Police Officer Klein, 22, a lifelong Harrison resident, is a graduate of Harrison High School and was formerly employed at the Doral Arrowwood Golf Course. He follows a family legacy in law enforcement; his grandfather, Albert Klein, retired in 1995 as Chief of Police of the Town of Harrison. Effective Monday, May 30, 2011, Police officer Klein has been assigned to this Department’s field training program, a structured curriculum designed to familiarize newly hired officers with the community and Departmental procedures under the guidance of experienced officers.

During the graduation ceremony, held at SUNY Purchase, Police Officer Klein, who served as part of the Color Guard for the ceremony, was presented with his graduation certificate by his grandfather, retired Chief Albert Klein, City of Rye Police Commissioner William Connors, Westchester County Department of Public Safety Commissioner George N. Longworth, District Attorney Janet DiFiore, and County Executive Robert P. Astorino. He was joined by family and friends, as well as new colleagues who were present to welcome him to the Department.