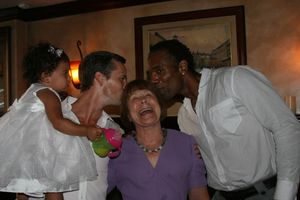 (PHOTO: Chris Fraley and Victor Self share in the joy of their recent marriage with Senator Suzi Oppenheimer and their seventeen month old daughter, Coco.)

It's not everyday that you are kissed on the top of your head by two constituents–simultaneously. Local State Senator Suzi Oppenheimer applauded and attended the recent wedding of Rye residents Chris Fraley and Victor Self.  Surrounded by family and friends, Fraley and Self exchanged vows on Sunday afternoon in Rye, becoming one of the first couples in Westchester County to marry under the new law.