Ninety One Years Later, a Facelift for Manursing Lake (AKA Playland Lake) 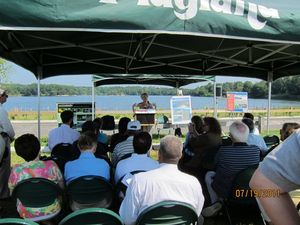 Local pol Judy Myers sent a note about her participation in the second and final rehab phase of Manursing Lake (AKA Playland Lake), adjacent to Playland Park and part of the Edith Read Wildlife Sanctuary.

The lake (and also all of Edith Read) is a haven for bird watchers and also acts as an important outlet for storm water. 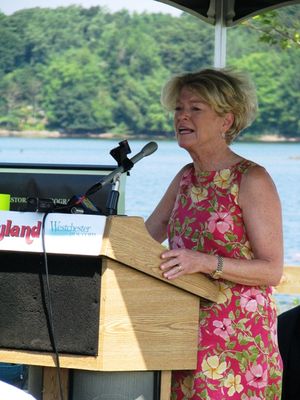 Here is the full announcement that includes some detail on the restoration project and the history of the lake:

"Westchester Legislator Judy Myers (D-Larchmont) joined a number of elected and local officials, environmental advocates and beaming residents today for the ribbon-cutting ceremony at the Manursing Lake habitat restoration here at the county’s Edith G. Read Natural Park and Wildlife Sanctuary and adjacent to Playland amusement park. The ceremony marked the completion of the second and final phase of work being done at Manursing Lake, one of Long Island Sound’s ecologically vital fish and wildlife habitats.

“While many know Manursing Lake as a lovely and dynamic backdrop to Playland, it is also part of the Read Wildlife Sanctuary ecosystem,” said Legislator Myers. “The continued preservation of the lake is essential because it acts as a stormwater repository that protects the Long Island Sound, provides a fish and wildlife habitat for the Read Sanctuary as well as the neighboring Marshlands Conservancy.”

The funding for the Manursing Lake restoration was a dual private / public effort, with Westchester County, New York State, the federal government and several non-profit organizations all chipping in.

Created by dredging in the 1920s, Manursing Lake covers over 80 acres and is 30 feet deep in some parts. Also known as “Playland Lake” while it was part of the boating concession at the amusement park, the lake was originally part of the wetlands and tidal creeks that were connected to the Long Island Sound. Now the lake is alive year-round with shorebirds and waterfowl, plus a wide spectrum of marine life. It is part of the migratory route for countless bird species and is much prized by birdwatchers and wildlife enthusiasts as a result.

The first phase of the restoration project was completed in 2009 when a new tidal gate on the lake entrance was installed and established salt marshes and tidal wetlands around the lake. The second phase focused on creating the coastal habitat areas. As part of Westchester’s continuing effort to control stormwater run-off and concomitant pollution draining into the Long Island Sound, the Manursing Lake project completed by the County will improve water quality and biodiversity in the area.

“Any time we invest in the environment and protect our natural resources, we are really working to ensure that future generations inherit a world that promises the same wonders we presently marvel at,” said Myers. “Looking at Manursing Lake today reminded me why public service matters, and how change for the better starts where you live, at ground—or sea—level.”"

The city council is holding a special meeting tonight, Wednesday, September 28, 2022. It was announced late Tuesday. The agenda seems to be driven by...
Read more
Green

Building on the beach clean up in July, Hen Island residents were back at it on Saturday, September 17th. The effort was part of...
Read more
Community Groups

Earlier this month a rain garden was installed on the grounds of the Rye Art Center at 51 Milton Road. Twenty volunteers joined the...
Read more