Half of the membership of Rye's Fire Department Local 2029 participated in last Sunday's Stephen Siller's Tunnel to Towers Foundation run.

"[Sunday's]'s run in NYC, with 7 of us running and one member acting as a flag bearer at the finish line.  Our funds along with the support of the volunteer companies allowed us to donate $1500 to the cause.  Because there were so many participants this year, 30,000+, it was amazingly congested; so it wasn't the fastest any of us have run, but we all had a great time doing it," said Andy Northshield, local Rye FD and VP of Local 2029 Rye Professional Firefighters Association. 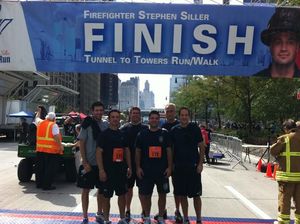 In the picture are (l to r) John Cotter, Ryan Prata, Andy Northshield, John Rodrigues, Dan Decarlo and John Castelhano. Not pictured is Kurt Tietjen who ran, but had to get back to work at headquarters and Alan Demmel who was the flag bearer.  Also, acting assistant chief Peter Cotter was there as a flag bearer.