Formed by local volunteers to help older adults enjoy life by remaining in their homes and not be forced to move to retirement communities, the group now boasts 48 dues-paying households with 68 members, mainly from Rye, but also Harrison and Rye Brook. The membership growth at SPRYE is in line with the pace in two other Westchester AIPs that have 105 households after 18 months or 180 after three years. Collectively, more than 650 county residents already belong to their local AIP organization. 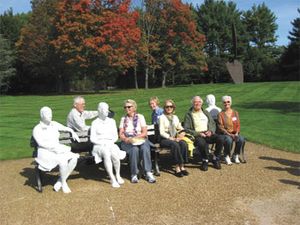 The services of SPRYE range from social to supportive for seniors. On the social side there was the visit to PepsiCo for a tour of many of the 45 works by major 20th century artists in the company’s collection, a tour of the Rembrandt et al drawings and American Impressionism exhibits at the Bruce Museum and some lunch get-togethers. A program of similar events and speakers for the first four months of 2012 has been drawn up.

On the supportive, some 41 rides were provided to six members who needed help to get to doctors offices, to physical therapy sessions and for shopping. Two requests for a handyman from two members were also filled.

Thirty-five Rye and area volunteers deliver the services – as drivers, staffing the office at the Osborn, working on events, doing the bookkeeping, or standing by to provide other services. They are organized by SPRYE’s one employee, Executive Director Betti Weimersheimer. One of her key roles is dealing with any special needs of members.

Information about SPRYE membership or volunteer opportunities is available at 481-5706 or www.sprye.org.