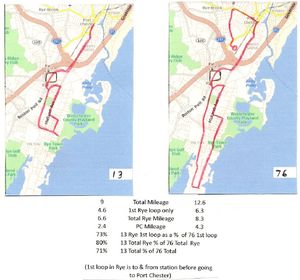 (PHOTO: This chart, prepared by Rye resident Arthur Stampleman, shows the comparison between the new #13 bus route (left) and the old #76 bus route (right) that was cut by county boss Astorino.)

Rye resident Arthur Stampleman continues to lobby for the restoration of the 76 bus and sent this report alomng in the wake of county and Rye City meetings:

Last (Wednesday) I spoke before Rye City Council on bus service in Rye, urging that they help to get bus service restored to Milton Point and a  timetable  that works for commuters. I thought you would be interested in the outcome. I am pleased to say the Council agreed to seek a meeting with the County Executive's office to review the issue. Below is an outline of my remarks. Attached is a comparison of the 13 and 76 bus routes.

Here is what I reported to the City Council.

– I have received 160 signatures on 1) petitions to keep bus 76 or 2) letters of protest addressed to the Commissioner of Transportation in Albany. The Commissioner reviews the Liberty Lines application to operate  bus 13. The addresses on these petitions and protests come from over two dozen streets in Rye. Workers who live outside Rye also signed protests. The petitions and protests have gone to White Plains and will then go to Albany.

- I read some of the comments expressing residents' concerns that were sent to me, without quoting any names.
– I showed side-by-side maps of the 13 and 76 routes, highlighting that the 13 route within Rye covers only half to two-thirds of the old 76.
– On Monday the County Legislature passed a resolution protesting the new Bus 13 unless it serves the route and timetable of the former Bus 76. The resolution was initiated by our County Legislator Judy Myers and will be sent to Albany.
– This week and last, Councilwoman Catherine Parker and I attended the County Legislature's committee meetings with the County Executive's staff, including his Chief of Staff George Oros, where Rye bus service issues discussed. We were given reasons for canceling the 76 and replacing it with the 13. The reasons do not stand up:

b) He said those former bus 76 users not on the new bus 13 route need only walk another mile or so to get to the 13 in Rye. Asking seniors and aging care givers to walk “only” a mile or two does not show recognition of the county’s own survey findings that transportation is the seniors’ primary need among county services.

c) He said Rye users can now get to White Plains directly from Rye on the 13 without transferring. All the comments I received said the need was for transportation between points in Rye, not to White Plains.

e) There was also a comprehensive set of cost and revenue data provided. Most of those present at the meetings had the same observations: bus 76 performance was worse than average in terms of a number of measures but there were many other routes that were worse still, yet those other routes continue to operate this year. County officials were asked why Rye was cut and not the others. The response was that demographic data showed Rye’s income was higher than for the other poor performing routes; service in Rye could be cut but not the others because they carried lower income passengers.  Income should not be the basis for eliminating public transportation. Also, many of the bus users in Rye are low income – they work for the higher income population. The legislature asked to see the demographic data.

f) I was told in one e-mail that the county has a budget gap of $114 million; eliminating the Rye bus subsidy of about $240,000 would help the situation. The subsidized cost of the Rye bus is only two tenths of one percent of the budget gap, it's taken for granted that public transportation is subsidized and it is not apparent why only Rye's bus service is cut.

If anyone who has not signed a letter of protest regarding the new bus 13 as long as it leaves out Milton Point and commuter hours, they can send a letter to Commissioner Joan McDonald, New York State Department of Transportation, 50 Wolf Road, Albany, New York  12232, re Application of Liberty Lines Transit, Inc., Case No. C-30270.