Suzanne Clary, President of the Jay Heritage Center and MyRye.com history correspondent, reports on an important gift to the jay heritage center in the wake of Mother's day:

Mother’s Day is an occasion to honor strong and devoted women in our lives. 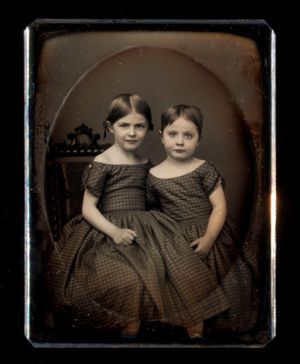 This year it is also a cause for celebration at the Jay Heritage Center as they announce their receipt of an exceptional collection of 19th century daguerrotypes of Jay women and their family members who lived in Rye at the historic 1838 Mansion. The highlight of the collection is a never before seen mother and daughter portrait circa 1848 of Mrs. John Clarkson Jay (nee Laura Prime, daughter of NY banker Nathaniel Prime) and her eldest child Laura at 16 years old. Yet another charming vignette dated 1850 shows 2 of the youngest daughters, Alice and Sarah, in gingham dresses at age 4 and 2.

These rare and luminous treasures were generously donated by architectural historian and preservationist, Anne Andrus Grady of Lexington, Massachusetts in memory of her aunt, Miriam Jay Wurts Andrus, a direct descendant of John Jay. Mrs. Andrus was born in New York City, the only child of Edith Maud Benedict and Pierre Jay Wurts. A 1931 graduate of Vassar College, she also attended Columbia University, and Johns Hopkins University where she studied international relations. During her lifetime she was known as an accomplished photographer as well as a civic activist and noted philanthropist. Her range of volunteer efforts benefited many academic and cultural institutions like the League of Women Voters, Johns Hopkins University School of Medicine, the Center Stage Theatre in Baltimore and Vassar College to name just a few. Mrs. Andrus’ niece, Anne Andrus Grady has distinguished herself as well as an outstanding champion of historic preservation in Massachusetts. She has authored numerous Historic Structure Reports and National Historic Landmark nominations, advising on the preservation of many of that state’s most prominent buildings such as Boston’s Old South Meeting House. Her work of 3 decades culminated in a Lifetime Achievement Award from the Massachusetts Historical Commission in 2010. She is delighted that the Jay daguerrotypes will be conserved and find a permanent home in Rye where they can be studied and interpreted.

The Andrus Collection is composed of 8 leather cased daguerreotype plates several of which are hand-tinted. For the Jay Heritage Center, a gift with this most meaningful provenance, including plates produced in the studios of well known New York Daguerrians, Rufus Anson and Jeremiah Gurney, opens the door to new educational programming about America’s “New Art” as photography was then dubbed. This magical method of capturing images on silvered copper plates was introduced in the United States by none other than Samuel F. B. Morse. Morse, who was a colleague of John Jay’s eldest son, Peter Augustus Jay, first brought the daguerrotype process back to America in 1839. Morse’s earliest students included Gurney, as well as a young man named Edward Anthony. Anthony produced popular steroviews during the Civil War and also branched out into the photographic supplies business, creating many of the decorative book-like cases in which Gurney’s and other Daguerrians’ photos were sealed. (Coincidentally Anthony’s granddaughter married John Clarkson Jay III in 1903.)
An opening reception and exhibit of the Andrus collection is scheduled for this fall at the 1838 Jay Mansion accompanied by a series of lectures on early American photography.