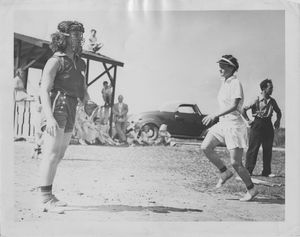 (PHOTO: A women’s softball team playing in the 1930’s – “Tootsie” Dempsey running the bases, with Louise “Wee” Dreves in the background.)

When Sheri Jordan of the Rye Historical Society opened the current Rye Sports exhibit, little did she know she was just starting to curate the exhibit when 90 year old Rye resident Ester Martensen came in to review the exhibit. And add to it…

It all started with the visit to our new exhibit on the History of Sports in Rye. Ester Martensen came downstairs and looked like she had something on her mind. I asked her how she had liked the exhibit and she took a deep breath and informed me that I didn’t have enough on Women’s Sports and it made her mad.

Now, I completely agreed with her—part of the difficulty in putting together any exhibit is finding relevant material when your own collection has significant gaps in it. Having two daughters play on Rye’s recent championship soccer teams, and cheering the daughters of friends on the championship field hockey teams, basketball teams, golf and lacrosse teams- I had recent Rye High School Girls Sports history covered. But I knew Rye had a long, rich tradition of girls’ sports teams, both interscholastic and competitive recreational teams. Unfortunately, all we had were photos of a basketball team from 1917 and another photo of a softball team from the 1930’s.  I couldn’t seem to get the full story.
I went down to Poppy’s and asked Gerry for some of her memorabilia knowing the Poppy’s softball team, “Ball Busters”, have dominated the recreational landscape for years. She said she’d see what she could find.

And then Ester walked in and gave me a piece of her sharp, 90 year old mind…..

Ester Davis was born in Rye in 1921. She attended Resurrection and went on to the new Rye High School in 1935. The new students were encouraged to join the various girls’ sport teams at Rye High School, and Ester thought softball sounded interesting. She must have shown a lot of talent because the next thing she knew, she was recruited to play right-field on the recently-formed Rye Colleens, a competitive recreational softball team.

The Rye Colleens were made up of young women from all parts of Rye, most of whom were out of high school and some of whom were married with young children. They were formed in 1936 by William Halahan, Jr., husband of the starting pitcher, Celeste “Teddy” Halahan. They played teams all around Westchester and Connecticut, usually on their home field at Rye Playland.

By 1938, they were one of the dominant teams in the region, playing teams from Bridgeport, New Haven, Harrison, and White Plains to name a few. They played against the Ossining Colored Giants, and took on the Bedford Correctional Facility team. All that mattered was an opponent who could test their talents. In front of a crowd of nearly 500, the Colleens defeated local rivals, A & S Sawpitters from Port Chester, for the Westchester Inter-Community Women’s Softball League Championship. That win sent the team up to Rochester to represent Rye, and their county, at the State Championships. They may have lost in that final game, but the outpouring of local pride and support showed how much they meant to the community.

This is what I dream of every time I put together an exhibit—that somebody will walk in off the street and let me know just what I am missing—and I’ll get a chance to fill in some of the gaps in my collection. Ester took a look at the one photo I had of a women’s softball team playing in the 1930’s and told me that was “Tootsie” Dempsey running the bases, with Louise “Wee” Dreves in the background. I asked her if she had anything else she could loan to us and she came back with a treasure trove of photos and newspaper clippings. Thanks to Ester and her donation of memorabilia, I now have the history of the Rye Colleens and the beginning of Rye Softball added to my exhibit. Stop by and learn about this marvelous team- and maybe fill me in on something else I might be missing.