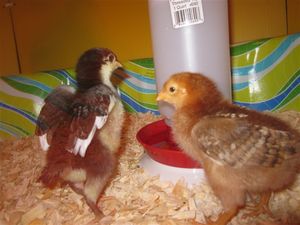 Rye Mom Maureen Gomez has a new brood. But instead of screaming for Planet Pizza and more screen time, this brood eats mealy worms. And they can't wait for their new coop to arrive.

Gomez is living off the land (very expensive Rye land) by raising her own brood of chickens. And she is recording the lives of her chickens only the way a mother would – with an extensive (online) diary called "The Rye Chicken Project".

The six chicks are Biscuit, Buff, Peaches, Rosie, Gracie, and Oreo. And Gomez is recording all the grade school antics:

"Rosie, who used to be the "Alpha" female of the group, has been knocked down a few pegs in the pecking order, and now is practically at"Cry Baby" status with Peaches.

Buff, who began her life as not quite the "looker" of the flock, is emerging as a ravishing Carmel Feathered beauty.  She still continues to be the most social and docile.  Hopping on a hand to be sprung from the brooder.

Gracie is second in command.  She and Buff are always the first out of the brooder, and never complain when it is time to return.  Biscuit and Oreo are the "Yes Hens", they fall in line, emulating Buff and Gracie.

Rosie and Peaches are the "Screaming Mimies" of the flock, letting out distress calls whenever they are taken out or put back in hte brooder.  From the loudness of the screeches, you would think we were chasing them with an ax!"

Our question: when do we get invited over for some fresh scrambled eggs?