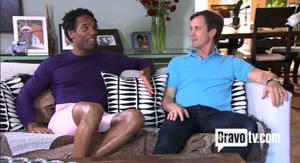 OK, we missed this one recently, but Chris Fraley and Victor Self, formerly of Rye and now living in Los Angeles, have hit the reality TV show circuit. The couple make an appearance on the bravo show Pregnant in Heels.

The couple was married last july in Rye by former Rye City Clerk Susan Morison. And don't forget the photo from MyRye.com of the couple kissing State Senator Suzi Oppenheimer on the head.