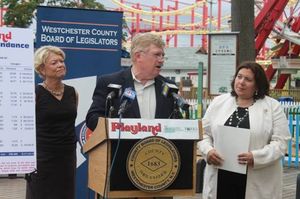 (PHOTO: Myers, Ryan & Borgia want to take Astorino for a ride on the Dragon Coaster.)

On Friday, three Democratic members of the Westchester County Board of Legislators including Rye rep Judy Myers called for an independent audit of Playland, the 280-acre County park and National Historic Landmark, because of of what they called "troubling inconsistencies and omissions" in the data regarding the park’s attendance and revenue figures being reported by the Astorino Administration.

Myers (D-Larchmont) is chair of the BOL Budget & Appropriations Committee and was joined by Catherine Borgia of Ossining and Bill Ryan of White Plains. The legislators vowed not to simply hand the beloved, family-friendly destination over to private operators or developers without a rigorous analysis and approval process.

“Once again, it is obvious that County Executive Rob Astorino and his Administration do not have a handle on the numbers,” said Myers. “The revenue figures that have been presented to the Board of Legislators do not include substantial profit centers like parking, mini golf and concessions—none of the revenues, in fact, budgeted for the year outside of ride fees, and it is important that these totals and the manner in which they have been reached are independently verified.”

Continued Myers: “As for attendance, there is, again, no way to verify their figures, and when more than 13,000 season pass owners are only being counted once in the annual totals, then it’s time to look closely at both the figures and the process for coming up with those figures. As it is said, audits are good for business. It’s about time Playland had a top to bottom evaluation of finances and operations.”

Legislation to authorize and conduct the independent financial and operational audit will be forthcoming, said Myers, who noted the County Charter presently requires the BOL to audit the County’s finances, which it does. But a full audit of just Playland needs to take place in order to understand how and why certain figures are generated, Myers said, and whether more efficient (and cost-cutting) operational procedures are being overlooked.

The legislators also noted that Playland has not been adequately marketed in the last three years, and they questioned the absence of television and radio advertising for the park. This year marks the 25th anniversary of Playland being awarded National Historic Landmark status.