We thought we'd stick with a Playland theme this week. Who remembers the boat landing at the Rye Playland pier? Leave a comment with your memories. 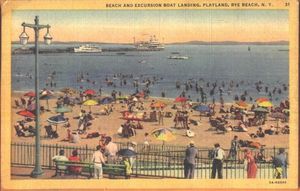 The 94th year of Playland and the first year under the direction of Standard Amusements will come to a close this weekend. To celebrate...
Read more
Playland

Playland Beach goes to the dogs on Saturday, October 8th. Ask any dog owner in Rye and Playland Beach is a favorite dog destination through...
Read more
Playland

Rye Playland is offering all guests junior pricing on Labor Day, even all you adults. On Monday - Labor Day - all tickets will be sold...
Read more