We Have a Winner (Two, Actually): 1st Annual “John Jay Medal for Service” 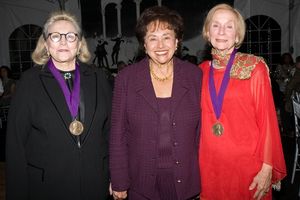 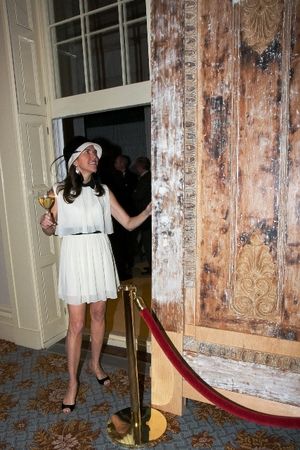 Jay Heritage Center (JHC) Founder Catherine "Kitty" Aresty and New York Preservation Advocate, Barbaralee Diamonstein-Spielvogel were  recipients of the 1st Annual "John Jay Medal for Service" awarded at JHC's 20th Anniversary Gala on Saturday, October 13, 2012. In keeping with the legacy of one of America's greatest Founding Fathers, the John Jay Medal recognizes individuals who demonstrate a selfless spirit of commitment and engagement with their community. The theme of the night was Roaring 20s – guests dressed in everything from raccoon coats and spats to flapper dresses and boas made for an evening that was simply "the bees knees!"

Congresswoman Nita Lowey and Westchester County Executive Rob Astorino served as Honorary Co-Chairs of the evening which drew over 170 people from Manhattan, Westchester and Greenwich to the National Historic Landmark site. While the event also marked an important 2 decade milestone for the organization,  adding to the festive feeling was the recent announcement of a public private partnership between JHC, New York State Parks and Westchester County to manage and restore the entire 23 acre Jay estate as a historic park and educational resource. The site has been a member of Westchester County's African American  Heritage Trail since 2004 and was added to the prestigious Hudson River Valley National Heritage Area following its nomination in 2008 by County Legislator Judy Myers.

JHC President Suzanne Clary commended the men, women and coalition of non-profits that first saved Jay's home but also emphasized the "new coalition" they are forming with other museums and preservation groups like the NY Preservation League, The Landmarks Conservancy, Audubon NY, the World Monuments Fund and more. Congresswoman Lowey recognized the power of bi-partisan support that continues to guide JHC's success. Ken Jenkins, Chairman of the Westchester County Board of Legislators presented a proclamation to both honorees and added his strong words of support for the Jay Heritage Center's mission to revitalize one of Westchester's premiere heritage destinations. Steve Otis, former Mayor of Rye brought accolades from Sen. Suzi Oppenhiemer and personally congratulated the two medal awardees on their vision and tenacity; he reminded the audience how dilapidated the Jay site was when first acquired and how miraculous its transformation had been under JHC's trusted stewardship. Both honorees gave moving remarks and thanks and underscored the continued need to stay "passionate" about preservation.