Your Invitation: Rye AD and Football Coach of 1950s & 60s Remembered Saturday, 11am

THE ALUMNI & FRIENDS OF THE RYE HIGH SCHOOL CORDIALLY INVITE YOU TO ATTEND THE DEDICATION CEREMONY OF BEN BEDINI PLAZA AT RYE HIGH SCHOOL STADIUM ON SATURDAY, OCTOBER 20, 2012 AT 11:00AM PRECEDING THE 82nd RYE/HARRISON FOOTBALL GAME. 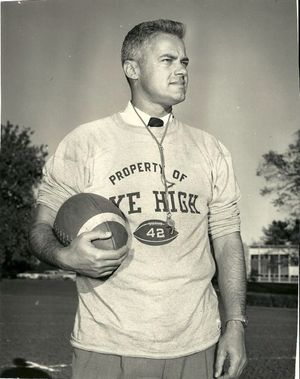 Ben Bedini, Rye High School’s Athletic Director and Head Football Coach from 1954 to 1962, amassed a sterling record of 59-5-0 for a .924 winning percentage including 4 undefeated seasons and 5 league championships.  After arriving at Rye in 1954 Bedini’s teams extended a 16-game winning streak to 33 games before an initial loss in 1955.  In 1956 a second 33-game run was launched that ended four years later.  To this day Rye’s two 33-game winning streaks rank # 37 in New York State football history.  Bedini was elected “Coach of the Year” by the New York Daily News in 1955 and in 1958 he received a similar honor from Section One of the New York State Public High School Athletic Association.  He is a member of the Westchester County Sports Hall of Fame and the Iona College Hall of Fame.  In later years Bedini was associated with training camp administration for the NFL’s Cleveland Browns and Kansas City Chiefs and was Senior Advisor to four North Carolina State University Wolfpack Head Football Coaches.

Bedini’s firm hand and guidance helped shape and transform the lives of many young Rye boys.  The on-the-field results of his Garnet Gridmen contributed to a winning culture in Rye that endures to this day.  Coach Bedini carefully developed the skills and sportsmanship of each team member, attributes that have served his players well in careers and life. 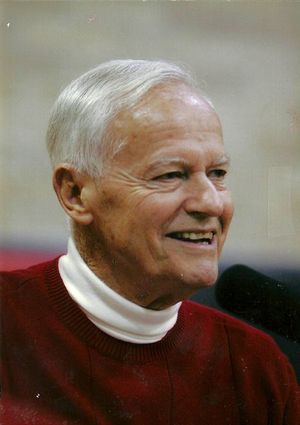 Coach Bedini died in 2008, but in remembrance of his Rye legacy, his players, assistant coaches, cheerleaders, family and friends independently raised funding for the creation and installation of Ben Bedini Plaza at no cost to the citizen taxpayers of Rye.  Bedini’s wife Peg, daughter Lynne, son-in-law Carlton and grandsons Corey and Cameron will be present at the ceremony and at the Rye/Harrison Game to root the Garnets on to a tenth straight victory over the rival Harrison Huskies.

The Dedication Ceremony will be held in Ben Bedini Plaza located at the rear of the stadium bleachers behind the Press Box along the Boston Post Road.

For further information regarding Ben Bedini Plaza and/or the Dedication Ceremony, please contact Steve Feeney at sfeen@opic.gov or 914-649-6630.