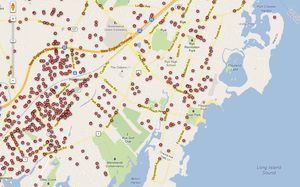 (PHOTO: Each dot is a Rye gun owner.)

Rye resident Philip Cicchiello is fired up. He is one of the Rye residents whose name shows up on a gun owner database published by LoHud.com.

Here is his letter to the editor. What do you think? Leave a comment below.

Below is a letter to the editor that I sent to the Journal news. As I, along with others in Rye, have been listed in the paper, I would like to express my opinion on this issue. Thank you. Please feel free to contact me at any time. The note on the bottom is in reference to the last letter I sent to the journal news. The editor saw fit to change my words, thoughts, ideas, and direction, of my letter.

Recently, at a family Christmas party, my cousin, a retired police officer, asked if I knew that I was in the newspaper. It was at that time I was informed that as a pistol permit holder, my name and address were listed in the local paper. First I thought why, what did I do but exercise my Constitutional rights? With a wife and two children at home, why would Dwight Worley, also a gun owner, list our names, addresses, and even apartment numbers? Why not just a general location? Why list our names and addresses? It seems he was trying to hang a Scarlet letter on our necks. This article had nothing to do with the safety of our neighbors or neighborhoods. It was all about scare tactics and an attempt at intimidation. All while pushing the left-leaning, anti-gun (anti-self defense?) ideology, of the journal news. And judging from the public outrage from coast to coast, I’m not alone in this opinion.
This whole article seems highly irresponsible. I understand it’s a matter of public record, but why make it so easy for criminals to know where the guns are and where there is no home defense. It’s as if Mr. Worley was saying there is an “anarchist cookbook” and then actually handing out printed copies to every journal news subscriber.

I called the paper. The first person that answered the phone refused to identify himself, even after I asked three times. He then hung up on me. When I called back, it went to voice mail.

Next, I called Kathy Moore, “watchdog editor”. She actually called me back. But when I asked the question that so many are asking, “does the paper have any moral or ethical responsibility if a crime takes place because of the information provided”? I was told that “hypothetical” situations would not be addressed.

I then mentioned my idea of a follow up article. How about listing all the journal news employees, from the president/publisher, Janet Hasson, to the part-time delivery staff (who enter our private property daily), who have pistol permits. After all, the writer of the article, Dwight Worley, of Queens, NY, has a pistol permit. I was informed that if they have a permit and live in one of these three counties, they are on the list and that no further information would be given.

How about an article listing the names and locations of all the section 8, food stamp (EBT), WIC, or unemployment benefits recipients? I want to know where all my tax dollars are going, while I’m going to work, don’t you? How would all those people feel? After all, they did nothing wrong either, just like me.
We all know there is no “putting the toothpaste back in the tube”. I am a gun owner. Everyone now knows where I live. I was professionally trained at the Westchester County Police Academy. I am proficient in the use of my legally owned weapons. I will not be intimidated by poor journalism that reeks of sensationalism, has no real journalistic merit, and rides on the coat tails of a true tragedy for our nation. If a crime is committed with the aid of this information, the journal news should, must, be held accountable as a co-conspirator.

PLEASE DO NOT EDIT MY WORDS OR CHANGE MY THOUGHTS OR STATEMENTS. THIS WAS DONE THE LAST TIME I SUBMITTED A LETTER AND THE CONTEXT WAS CHANGED TO SUIT THE EDITOR. PLEASE CALL IF YOU HAVE ANY QUESTIONS.