If you missed it, the NY State Gaming Commish is looking for the poor soul who has been carrying around a $1 Million Dollar winning Lotto ticket for 11 months. 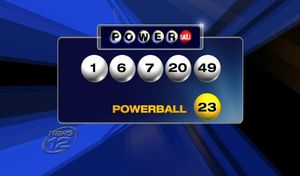 The "winner" has one more month to claim the prize at which time the ticket becomes void and the ticket owner changes from a "winner" to "loser". The ticket was purchased at Rye's Playland Market.

"RYE (WABC) — The person holding a Powerball ticket worth $1 million has just one month to claim the prize!

The ticket for the August 25, 2012 drawing was sold at Playland Market, 488 Forest Avenue in Rye, Westchester County.

"We are urging players to check their tickets because someone has a $1 million winning Powerball ticket that will expire on August 25," said Gardner Gurney, Acting Director of the Division of the Lottery. "We're hopeful the lucky winner has already signed the ticket and is making plans to claim it before it's too late."

As is always the case, in the event the prize is not claimed by August 25, the prize money will be returned to the prize pool for future winners. It is sometimes used to subsidize prizes for large jackpots, promotions and/or special one-time games."