Jovanovich To Run For Rye Mayor

Here is the announcement from Jovanovich. What do you think? Leave a comment below. 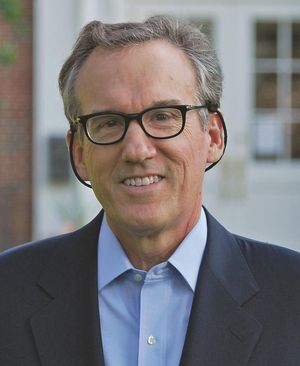 Councilman and Deputy Mayor Peter Jovanovich announced today that he is running for Mayor as an Independent. Through the petition process, he plans to be on the ballot this fall.

“I believe that the City of Rye can only be made a better place through the collaboration of Democrats, Republicans, and Independents,” explains Jovanovich. “The challenges we face are practical, not partisan; and we need volunteers from all points of the political spectrum.”

Here are some of the issues that he has addressed in his first term on the Council and will focus on as Mayor:

Rye made a good step forward by approving the infrastructure bond last fall. But there is more work to be done: rebuilding the road bed and walkways at Station Plaza, improving traffic and pedestrian signals at Theodore Fremd/Purdy Avenue intersection, and upgrading crosswalks and sidewalks, particularly near schools.

He pledges to protect our land use commissions from political influence. The Mayor and Jovanovich were pressured by the chairman of a Rye political party to fire the Chairman of the Planning Commission, and to appoint a “developer-friendly” replacement. They refused. Jovanovich states: “I promise to only appoint members to the land use commissions and boards who believe they are stewards of Rye’s neighborhoods, wetlands, and wetland buffers.”

The City is now in excellent financial health because of the difficult decisions made over the last four years to deal with the worst recession in 75 years. Services were maintained while taxes stayed under the tax cap, expenses held flat, reserves restored, and our AAA rating reaffirmed.

The Recession put pressure on all City Departments and its non-profit partners like the Library. As Council liaison to the Library, Jovanovich worked closely with the Board of the Rye Free Reading Room to negotiate a sustainable labor agreement. He strongly promoted the use of bond funds to provide sprinklers and other improvements to the library’s historic building.

The Golf Club scandal revealed several shortcomings in the way the City of Rye conducts its business – particularly at the Enterprise Funds (Boat Basin and Golf Club.). First, the City needs stronger auditing oversight. Jovanovich proposes the City hire a full-time internal auditor, and, to supplement and provide further oversight, also contract with specialist outside auditors to review the Golf Club and the Boat Basin — places where a great deal of monetary transactions take place.

Second, to provide proper checks and balances in the operation of Enterprise Funds, Jovanovich supports new governance procedures, including the expansion of the Golf Club and Boat Basin Commissions to include citizens with financial expertise.

Third, reinforce the mission of providing low-cost recreation amenities. “We have lost sight of this goal: to provide affordable access to recreation,” says Jovanovich. “The cost of a pool membership at the Golf Club is now three times the average cost of other pools in Westchester. That’s not right.”

Councilman Jovanovich has strongly supported Sustainable Playland Inc.’s proposal, from its inception, to save the Park. If elected Mayor, he will work tirelessly to see this innovative approach to recreation in a parkland setting come to fruition.

Jovanovich says he will pursue a balanced approach to governing, combining sound fiscal management with improvements to Rye’s infrastructure and enhancements to its quality of life.

“That’s been my approach throughout my life in Rye,” he states. “Whether as a Director and Treasurer of the Friends of the Rye Nature Center, Council Liaison to the Rye Free Reading Room, or as a member of the Board of Architectural Review and the Planning Commission, I have concentrated on serving the best interests of Rye ¬without regard to political affiliation. If elected Mayor, I will continue in that manner.”

and the candidate supplied bio:

A graduate of Princeton University, he started in publishing as a college sales representative for Macmillan in 1972. He held various editorial and marketing positions in Macmillan’s College and Trade Divisions until 1977, when he was named a vice president of Macmillan Publishing and head of its trade division.

Mr. Jovanovich joined Harcourt Brace Jovanovich, Inc. in 1980 and held a series of positions, including President of HBJ’s Trade Division, Managing Director of HBJ, Ltd. (London), and President of Academic Press.  In 1989, he was named President and CEO of HBJ.

In 1992, Mr. Jovanovich was recruited to become CEO of Macmillan/McGraw-Hill School Publishing. In 1995, he became President of McGraw-Hill’s Educational and Professional Group. During his tenure, McGraw-Hill became the largest educational publisher in the world.

In 1997, Mr. Jovanovich joined Pearson, plc where he oversaw the creation of Pearson Education, which eventually surpassed McGraw-Hill to become the world’s largest education company with over $4 billion in sales and 20,000 employees. Mr. Jovanovich held the position of Chairman and CEO of Pearson Education until 2005, when, because of health reasons, he went on long-term leave.

Jovanovich also served as a director and Chairman of the Board of the Association of American Publishers. He was elected to the Educational Publishers Hall of Fame in 2007.

For the past six years, Peter Jovanovich has served pro bono as president of the Alfred Harcourt Foundation, based in Rye. The Foundation provides college scholarships to low-income students from some of the lowest-performing high schools in the metropolitan area. Currently, the Foundation gives approximately $650,000 a year in scholarships supporting approximately 110 students, most of whom attend the City University of New York.

Uniquely, the Harcourt Foundation seeks students whose test scores are not stellar, but who have exhibited the personal strength to overcome significant life challenges. Through the provision of tutors and mentors, and the personal intervention of Mr. Jovanovich, who interviews each one of the students each year, approximately 75% of the Harcourt scholars graduate in four years. (The national average for low-income students is closer to 30%.)

Peter Jovanovich was elected City Councilman in 2009, and for the last two years has served as Deputy Mayor. He has helped Rye restore its financial health, improve and invest in its infrastructure, and enhance our quality of life.

Mr. Jovanovich joined the Board of the Friends of Rye Nature Center in 2007, eventually serving as Treasurer. During the difficult times of the last recession, he worked with the Director and other Board members to make the difficult decisions necessary to save the “Friends” organization. Today, the Friends of Rye Nature Center is thriving: more programs are being provided to more children than ever before.

He served Rye as a member of the Board of Architectural Review and the Rye Planning Commission. As Council liaison to the Rye Library, Jovanovich worked closely with the Board to negotiate a sustainable labor agreement. He strongly promoted the use of bond funds to provide sprinklers and other improvements to the library’s historic building.

His wife Robin, publisher of The Rye Record, has served as a director of the Rye Arts Center, and Vice-President of the Rye Free Reading Room. She is currently a member of the Board of Architectural Review. Her engagement in helping the non-profits around town is known throughout the community.