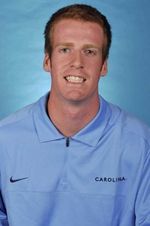 Colin Moran, from the Rye baseball family that brought us a family of baseball and basketball players including B.J. Surrhoff, has been drafted #6 overall and selected by the Miami Marlins. There was early speculation he would be selected high up in the draft.

Here is a write-up from LoHud.com, including a mention of lots of father son time spent at Rye's Disbrow Park and how the family had its own key to the Proswing baseball facility:

OMAHA, NEB. — ….Now, likely on the verge of signing a multimillion-dollar deal, expect nothing to change. Consider that Moran’s only purchase since the Miami Marlins drafted him sixth overall on June 6 was a pair of sunglasses bought with his parents’ money.

So to know him is to know his intentions for each of those seven figures: nothing…

The hits and RBI piled up during his three-year All-America career at North Carolina, which ended on June 21 with a loss to UCLA in the College World Series. Outside the batter’s box, only Moran’s words are fewer than his excesses.

When Moran was a freshman, teammates said they needed half a school year for him to open up. Coaches hear he’s funny but are seldom privy to the deadpan one-liners mumbled for players’ ears only…

Moran’s intentions were always pure. He was born into a family of athletes, one that sent two of his uncles to the major leagues and a brother to Triple-A (for now), and produced a grandfather perhaps better than them all. Dick Surhoff played in the NBA and was later a fast-pitch softball legend; sons B.J. and Rich were big-leaguers, B.J. for 17 years; and Brian Moran pitches for the Seattle Mariners’ Triple-A affiliate in Tacoma, Wash.

The younger Moran never talked much, according to his parents, but he has long pursued the same baseball dream. The game has mostly consumed him, particularly hitting. He and his brother hit so often, the family had its own key to ProSwing, a training center in Mount Kisco, and made off-hour trips there in snowstorms. His father, a plumber, returned home during lunch to throw pregame batting practice at Disbrow Park near their home in Rye when Colin was in high school. He even pitched Wiffle Balls to his sons in the backyard back then, the grass illuminated by floodlights.

“The neighbors weren’t real happy with us when they were doing it at midnight on a school night,” Diane Moran said.

That persistence earned Moran a scholarship to his dream school, North Carolina, the former home of his uncle B.J. Surhoff, the No. 1 pick in the 1985 draft and the last Westchester County product selected higher than Moran. He arrived a wispy 6-foot-3 with narrow hips, narrower shoulders and an aversion to weights."