A Legend Lives Among Us , By Noga Ruttenberg, Rye Resident

If you are a local, you have probably seen him eating lunch at On the Way Café or walking with his wife, Robbie, by the duck pond in Rye.  More than likely, you were unaware that you were in the presence of a coaching legend.

In 1960, after coming back from the Canadian Football League, Frank Gagliano, the former quarterback from the Bronx set his sights on heading the football program at New Jersey’s Roselle Catholic High School.  The only problem – there was no football program.  The high school decided not to have a team.   Over 50 years later, Gagliano’s resume is overflowing with accomplishments and none of them have to do with football. 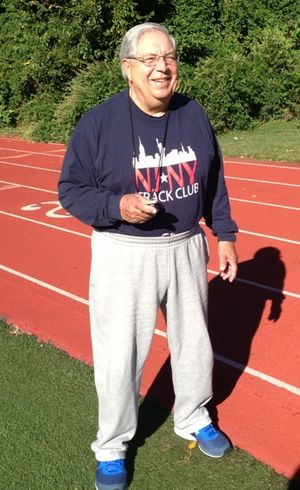 Coach Gags, as he is known to his athletes, has coached every level of track and field, from high school athletes to Olympians – 14 to be exact. After his stint heading the track program at Roselle Catholic HS, Coach Gags was an assistant coach at Manhattan College, assistant coach and eventually Director of Track and Field at Rutgers University and then Director of Track and Field at Georgetown University.  He went on to found the Reebok Enclave Professional Track Team while at Georgetown.  In 2001, he moved to Palo Alto, California to coach another professional track team, The Nike Farm Team, where he remained until 2006.

In July of that year, he continued his focus on professionals and went to Eugene, Oregon to coach the Oregon Track Club.  By 2008, 3 Olympians had emerged from the club:  Nicole Teter, Nick Symmonds and Christian Smith.  To date Gags has produced 140 All-Americans, 14 Olympians, 7 individual National Champions, and 23 Big East Championship Teams.

Since moving to Rye in 2009, Coach Gags has continued to coach a countless number of athletes to National and World Teams.  He does so now as founder and head coach of the NJ*NY Track Club.  Olympic hopefuls move to the tri-state area specifically to train under his tutelage.  One of his trusted assistants and another local coach, Julio German from Larchmont, NY, travels with him to Rutgers University each week to train professional runners in a variety of track events.  “Coach Gags is the kind of rare coach who has a way of connecting with his athletes on a personal level.  He has a huge heart in addition to a wealth of knowledge about coaching.  I am incredibly fortunate to get to learn from him.  Coach Gags is a dream mentor but first and foremost, he is my friend”.

The most difficult part of running the NJ*NY Track Club is fundraising.  The club is a 501(c)(3) non-profit organization, which relies on public and private sponsorship to support the athletes.  The club members are all college graduates and they are tailoring their professional careers to fulfill a dream of making it to the highest level in the sport of track and field – the USA Olympic Team.  “The goal of our coaches and athletes is to have NJNYTC members make the 2015 USA World Championship Team and, ultimately, the USA Olympic Team in 2016.  It would be a fantastic 2015-2016 to have a medalist in these two great meets,” said Coach Gags.