The Jarden Westchester Triathalon, around the corner on Saturday, September 29th, has added a collegiate tournament to race day. The race committee will host the Northeast Collegiate Triathlon Conference
Championship on Sunday, September 29 bringing at least 114 college
aged participants to the event on race day. 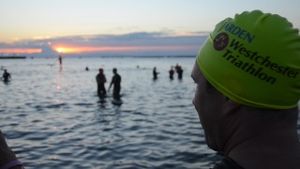 The race, in case you have been asleep for the last 29 years, is an Olympic distance triathlon geared for adults that includes a .9-mile swim
in the Long Island Sound, a 25-mile scenic bike and a 6.2-mile run that
will starts and finishes in Rye.

According to JWT Chairman Arthur Henderson, “I recognize that the NECTC brings some very talented young men and women that might not have otherwise been able to participate and we look forward to hosting them this year in our backyard. If this is anything like last year’s Championship Conference in Montauk, it will elevate the competitive playing field and bring some incredibly exciting course records for the event.”

The Northeast Collegiate Triathlon Conference was formed in 2006 to provide an organized series of collegiate triathlon races for northeast universities. The NECTC also works to lower expenses, obtain college benefits and to organize conference wide sponsors. The partnership between the Conference with the nonprofit 501(c) 3 Westchester Triathlon Committee is perfectly aligned as the committee advocates to aid charities, foster athleticism and encourages young people to get involved in the sport of triathlon.

Now in its 29th year, the Jarden Westchester Triathlon is one of the northeast’s premier Olympic distance races, making generous donations to charitable causes, including The Blazeman Foundation for ALS, Challenged Athletes Foundation, and The Leukemia & Lymphoma Society/Team in Training, MAC Angels, The Rye YMCA and The Wounded Warrior Project (WWP). A portion of the registration fee is tax–deductible.