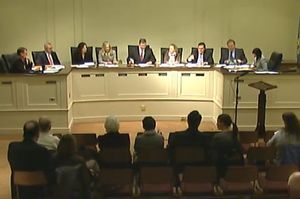 Here is the release:

Tonight, at its first meeting of the year, as its first order of business, the Rye City Council named Richard Mecca and Richard Slack to fill the two vacancies on the Council. 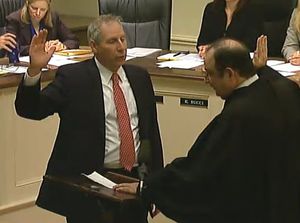 (PHOTO: Mecca is sworn in.)

Mecca, a Rye resident since 1980, is an electrician who owned Mecca Electric in Rye for many years, and currently serves as an Electrical Inspector for the City of White Plains.  He serves on the Rye Flood Advisory Committee, and previously served on the Rye Planning Commission, the Rye Board of Architectural Review, and Mayor Otis’ Task Force on Master Planning, among other committees.  Mecca is also a long-time member of the Rye Fire Department, and has served as a Captain in the Patrol Company.  He and his wife are the parents of two adult children who attended Rye City schools.

Joe Sack, Mayor of Rye, said:  “Richard Mecca is a very thoughtful person who has been actively involved in public life in Rye for over 30 years.   On a Council comprised of attorneys and finance professionals, Mecca brings a different and welcome perspective.  The City will benefit greatly from his vast experience and close ties to the community.” 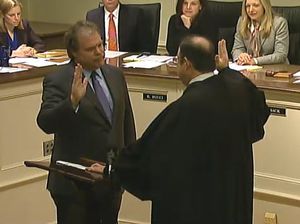 Slack, a Rye resident since 1996, is an attorney and partner with the firm of Weil, Gotshal & Manges LLP in New York City, specializing in business and securities litigation, and corporate governance matters.  Slack has extensive experience advising boards of directors and representing major companies.  A former Rye Little League coach, Slack and his wife – Rye City School Board President Laura Slack – are the parents of three children who have all attended Rye City schools.
Mayor Sack also said:  “Richard Slack has a keen mind and a strong sense of right and wrong.  Personally, I will always remember that Slack had the gumption and fortitude to speak out against the City’s mishandling of the Rye TV affair. These are exactly the qualities that we need on the Council.”

Noting that Mecca is a registered Republican and that Slack is non-affiliated with any political party, Mayor Sack also commented on the Council’s appointments:  “We were looking for the folks who we felt could best serve as part of the Council team, regardless of political party affiliation.  This was the same approach that we took last year in successfully partnering with Kirstin Bucci, a registered Democrat, to run on the Republican line.  Our community wants and deserves problem solvers and consensus builders, not political partisans, and we once again feel fortunate to have put together the right mix of people.”

The Council vacancies were created by Sack’s election as Mayor, and Catherine Parker’s election to the County Board of Legislators last November.  Sack and Parker were two years into four year Council terms.  Pursuant to the City Charter, the appointments of Mecca and Slack to the Council will run through the end of the year.  A special election this November will determine who will serve the remaining year of the unexpired Council terms.

Facebook
Twitter
Email
Previous articleThe State of Joe, Two Council Appointments, Patronage & More: Items on the Rye City Council Agenda for January 8, 2014
Next articleSack State of the City Address: “We Are Built on a Solid Foundation”